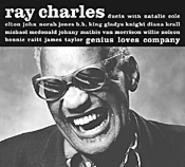 Too bad Ray Charles isn't around to hype this CD with its star-studded duets. It's pretty good in places, forgettable in others, and likely to sell pretty well. Charles's death on June 10 is probably all the promotion it needs, though. Besides, trophy performers like Charles contemporaries B.B. King and Willie Nelson turn in fairly decent performances, though "It Was a Very Good Year," a Charles-Nelson tradeoff, is more treacly than convincing. Even at 73, Charles could get down; he, not Natalie Cole, is the sexy one in their update of "Fever," and his voice, not Diana Krall's, gets under your skin in "You Don't Know Me." Even though there aren't enough uptempo tunes -- it's the rare record that features James Taylor singing a number with a sprightly beat, as he and Ray do on "Sweet Potato Pie" -- the vibe is pleasant, the arrangements professional.

Despite its gloss and occasional soul, Genius Loves Company may be more memorable for marketing than music. It's the inaugural disc in a relationship between Concord Records and Hear Music, the custom Starbucks label. That means Starbucks will feature it September 1, the day after it goes on sale in record stores. No word on whether Brother Ray was a coffee man.