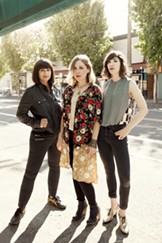 Brigitte Ssire
When indie rockers Sleater-Kinney went on hiatus back in 2006, the band did so quietly. While a certain amount of drama often accompanies band break-ups and breaks, that wasn’t the case for the Portland, Oregon-based trio. Rather, singer-guitarist Corin Tucker and guitarist Carrie Brownstein remained friends. At the end of 2011, Tucker suggested she and Brownstein get the band, which also includes drummer Janet Weiss, back together.

“I mentioned to her that we should play together again,” says Tucker via phone from her Portland home. “That spurred a bunch of conversations. We started talking about how we would do it and what it would look like. After we jammed together, we decided we wanted to make another record. That took us a couple of years.”

From the very start, the women decided that they didn’t want to just revel in their past glories. Rather, they wanted to record some new songs and tour in support of a new album.

“We wanted to make a new album to reignite and reinvent who we are as a band,” Tucker says. “I’m glad we did that. It took a long time and a lot of work, but I’m glad we did it that way. It’s a great way to introduce yourselves to a new generation of fans and to say, ‘This is who we are in 2015. All three of us are really passionate about music. This band has meant a lot to us over the years. All of us are committed to working hard to have the band always come across as a really good group. We want to maintain the level of respect that we have earned.”

The band earned that respect quickly after forming in 1994 in Olympia, Wash., the unofficial home of the riot grrrl movement that paired feminist philosophies with punk rock power chords. Taking their name from Sleater Kinney Road, a street near one of their early practice spaces, the band drew upon the experience of both Tucker, who formerly led the riot grrrl band Heavens to Betsy, and Brownstein, who formerly had been in the band Excuse 17. Because they would often play the same clubs, they initially formed Sleater-Kinney as a side-project. Their self-titled debut featured Tucker’s high-pitched vocals, causing more than one critic to compare her screech to that of X-Ray Spex’s Poly Styrene.

“I think that for me when I started out as a singer, I was always singing over really distorted guitars,” Tucker explains. “I think that’s true of a lot of rock singers. But it was especially true for me coming from a punk background. I really looked to people like Poly Styrene and Kathleen Hanna — women who had a unique and recognizable vocal style. I worked hard to grab people’s attention with my voice. I think at the time when I started singing there were people who were really not excited by the sound of my voice. I think that’s true for some people today. The people who do like my voice love it. That’s really special.”

For No Cities to Love, the new album the band issued earlier this year, the group set out to capture that intensity of past albums.

“I think when we went back to making new material, we were able to step back and see who we are as a band and what we’re good at as songwriters,” says Tucker. “We really focused on vocals and melodies for this record. There’s a lot of singing in unison, even more than on any other record. We wanted to make a record that people could be able to sing along to. We also wanted to bring a present-day sensibility to the music. It’s guitar rock but it has a synthesizer flavor to it, almost referencing Nile Rodgers at times with the guitar playing.”

Though the group worked in three different studios, the album still sounds cohesive.

“That’s owing to [producer] John Goodmanson,” says Tucker. “His level of professional attention to detail is bar none. He is incredible at making a cohesive album. That’s really important to him. I’m glad we were able to work with him again.”

In the wake of the album’s release, the group’s been plenty busy. It played a headlining show to a soldout crowd at Chicago’s Pitchfork Music Festival, and Brownstein released her memoir Hunger Makes Me a Modern Girl. It collaborated with Bob’s Burgers to create the music video for “A New Wave.”

“That came about because our publishing agent is friends with the people who make Bob’s Burgers. He just suggested it,” says Tucker. “The people who make that show are fans of the band. We were like, ‘Really?’ We were pleasantly surprised. They had a couple of questions for us but they mostly ran with it. I think it’s amazing. I love how it turned out. I’ve been a fan of Loren Bouchard. I was a big fan of Dr. Katz. To have a creator like him do a visual piece for us was an exciting thing to have happen for this record.”

“Surface Envy” puts Tucker’s howling vocals up front in the sound mix and gathers momentum as the band cranks up the guitars and establishes a compelling groove in the process.

“I think that song was written as a flashpoint in terms of how I feel about the band and how important it is for me and yet how difficult to be a parent and be in a band,” says Tucker. “That’s been a struggle for me for a long time, but it’s a worthwhile one. It takes all those concerns and wraps them into a song. Music can be this strong sense of identity and we have come to recognize that with our fans. It’s about bringing people together and being able to share that with other people. That’s a really special thing. As we’ve gotten older, we have learned to appreciate that more.”

From the footage of recent live performances that have been posted on the Internet, it’s apparent the band sounds really tight. Does Tucker think the musicianship has improved?

“Definitely,” she says. “That’s the awesome thing about sticking with it or even coming back to it. After working with other people and doing other things, we’ve brought a strong level of musicianship back to the band.

Thanks to the success of the IFC program Portlandia, a quirky comedy that has no parallel, Brownstein has successfully launched an acting career. That doesn’t surprise Tucker one bit.

“You know, she always wanted to do acting and comedy,” she says. “Even back in the day she was doing improv in Olympia. I’m happy for her that she has found Portlandia and that really has become this great success.

Tucker anticipates that the reunited band will continue to tour and record.

“I would definitely like to,” she says. “It just depends on people’s schedules.”