Rewind: 45 Years Ago On This Date Queen Graced the Cover of Cleveland Scene 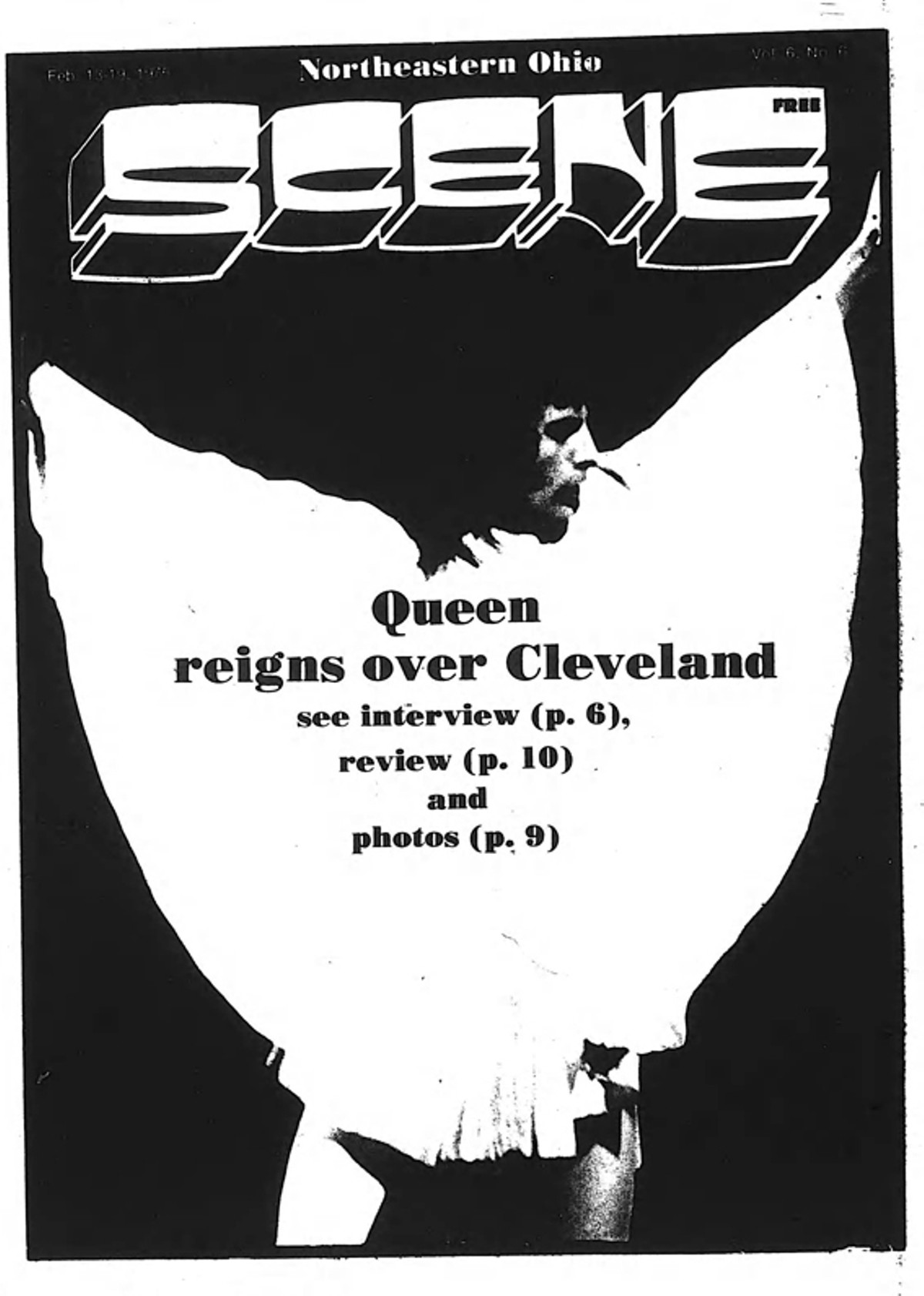 This interview that writer Henry Keiluhn conducted with Queen's Brian May and Freddie Mercury appeared in the Feb. 13 issue that came out in 1975. It featured the headline "QUEEN; Hymns and Heart Attacks." It has been edited for length.

Take an astronomer, an ex-dental student, an electrical engineer and a graphic artist; put them together in a recording studio, and you have one of rock's newest "sensations"—Queen. And though many bands lay claim to such a title, few have been as deserving as this English quartet. While singer Freddie Mercury, guitarist Brian May, drummer Roger Meddows-Taylor and bassist John Deacon established their basic hard rock sound on their first album, the next — QUEEN II — demonstrated that they were capable of much more. The band's third and latest album, SHEER HEART ATTACK, proves the versatility of Queen beyond question with the polished performance of several musical styles, including ballads, hymns and even a dixieland rag tune. Queen's artistic success is equalled financially, as is shown by the healthy sales of all three albums and two British hit singles.

Following the release of SHEER HEART ATTACK, the band took to the road, headlining a tour of England and Europe. To say that their high-energy, extraordinarily staged shows drove the audiences wild would be an understatement. Everywhere they went, Queen left ecstatic critics and fans in their wake.

Though their overwhelming successes give the impression of overnight stardom, Queen's climb to rock 'n' roll hierarchy was hardly that. While the band was formed in 1971, it wasn't until well over two years later that their first album was released. With little promotional aid, Queen gained respectable followings on both sides of the Atlantic. QUEEN II solidified and increased the following, and the band started their conquest of America with a full tour as opening act for Mott The Hoople. However, Queen's participation was cut short during the first week in New York when May contracted hepatitis. Disappointed and frustrated, the band returned to England to await May's recovery and begin work on their third album. Queen hadn't even finished a week of recording when May was again laid low, this time by an ulcer, leaving him out of the studio and in the hospital for several weeks. Instead of giving up, the rest of the band carried on with the recording. Upon May's return, the final songs were put on tape, the guitar parts dubbed in and a unique and surprisingly polished SHEER HEART ATTACK was ready for pressing. Following the album's release and the aforementioned European tour, Queen was ready for a second try at America. And America was ready for them. Almost as quickly as dates were added, they sold out, making the tour a Freddie Mercury and Brian May triumph. SCENE spoke to Mercury and May two weeks ago in New York as they made final preparations for the tour.

SCENE: When did you begin recording SHEER HEART ATTACK?

MERCURY: It started when Brian was ill actually. But we sort of carried on without him for a couple of weeks.

SCENE: What kind of effect did Brian's illness have on the recording of the album?

MERCURY: There wasn't any real effect. We did have to replan the album. I mean on the first two albums we had sort of a method of doing things, but after that we had to reshuffle things. We had to sort of say, "Well, Brian's not here; let's go a little further without him." We had to more or less leave gaps for him to fill in. Most of the overall work was done by the time he came out.

MERCURY: We finished that about three months ago. Then we went to Europe. The British tour was one of the best we've ever done. It's quite staggering; we built up the rapport with the audience. I think you can more or less say Britain is conquered. It was very, very successful. We went straight in and headlined, which I think was the best thing to do.

SCENE: What will your stage show be like this tour?

MERCURY: The basis of the show is to put the three albums across, and to let people know what we're all about. I think that one thing the people don't seem to realize is that though we do basically the same songs, we are different when we do them on stage. We don't necessarily give the songs the same format. The songs have a different sort of structure just to suit the stage. We utilize the lights and the costumes, and up on stage there's a lot of excitement.

SCENE: Do you have any problem creating the various vocal and instrumental effects on stage?

MERCURY: We have to cater to the stage. It's not so much of a problem really; we just do it differently. We have four of us singing, which helps; and as far as Brian's parts where there are multi-tracked guitars, he uses echo plexes, which work very well. We still make sure there is the entertainment value. We don't want to just reproduce note for note what we have on the albums. The basics are there; it's just that we put in more excitement.

SCENE: Queen was formed about four years ago, yet the first album didn't come out until 1973. What was the band doing in the meantime?

MAY: Basically, persuading people that we were capable of doing the thing. That was a pretty depressing time for us because we were doing a stage show of sorts, but we didn't have the money to get the equipment that we wanted. It was just trying to convince people that we could do the gigs even though we didn't have the equipment. And trying to convince the record companies to take us on. You needed a record to get the gigs and you needed the gigs to get the record. We spent a lot of time doing private concerts. We used to hire small theatres for 100 people or so and invited all our friends and people we thought might be interested. People would always come up to us and say, "Yeah, amazing, we've got to do something." But nothing ever got done. So in the end, we made some demo tapes and took them around to the record companies and that's how we finally convinced them that we could do something.

SCENE: While your first album was pretty straightforward rock 'n' roll, QUEEN II was very complex, with many harmonies and interrelated tracks.

MERCURY: That's the other side of us. It's all a phase we were going through after the first album, which was very immediate, sort of letting people know what Queen was about. But we have a lot more to offer and we couldn't really put it in the first album. I mean QUEEN II could have been the first album because that's what we really wanted to do. But I think that it would have been far too much for people to take on a first album. And QUEEN II was just a way of showing that we can do different things. The new album, SHEER HEART ATTACK, is different enough. It's more sophisticated, cleaner. On that album we were relying heavily on the quality of the songs while trying to put across the versatility of the band. I think it's come across.

SCENE: Though SHEER HEART ATTACK is quite different from anything the band has done before, "Stone Cold Crazy" sounds a lot like the stuff on the first album.

MERCURY: That is, in fact, the first song Queen ever performed on stage. When Queen was formed about four years ago, we sort of wrote that together and for some odd reason we left it off of the first two albums, 'cause we just thought it was too raw. But we just thought to put that in to show another facet of Queen. The contrast of "Stone Cold Fever," followed by the hymn-like "Dear Friends" seemed to work. The sheer velocity of the song made it worth it. In fact, on stage we do it even faster. I think it's a good thing we kept it until the third album. But that was one of the first songs the band ever did on the road.

SCENE: Freddie, you mentioned that Liza Minnelli is one of your influences. I've noticed that the way Queen and Liza perform on stage is sort of similar, except for the type of music.

MERCURY: I remember I said that one time, but it's basically just a fantasy. I simply enjoy watching her. But, if I ever got a chance to meet her or talk to her, it would be great. As for our stage show, you can probably pick out certain similarities to Liza's show. Well, not similarities, but influences. Basically, we're a hard, heavy rock sort of band. And when it comes to doing it on stage, the aggressiveness is there, and that's what we want to get across and you can't just do that standing still. You've got to give it all you've got. That's the only way to get the velocity and stamina across.