Rewind: 46 Years Ago On This Date Stephen Stills Made the Cover of Scene 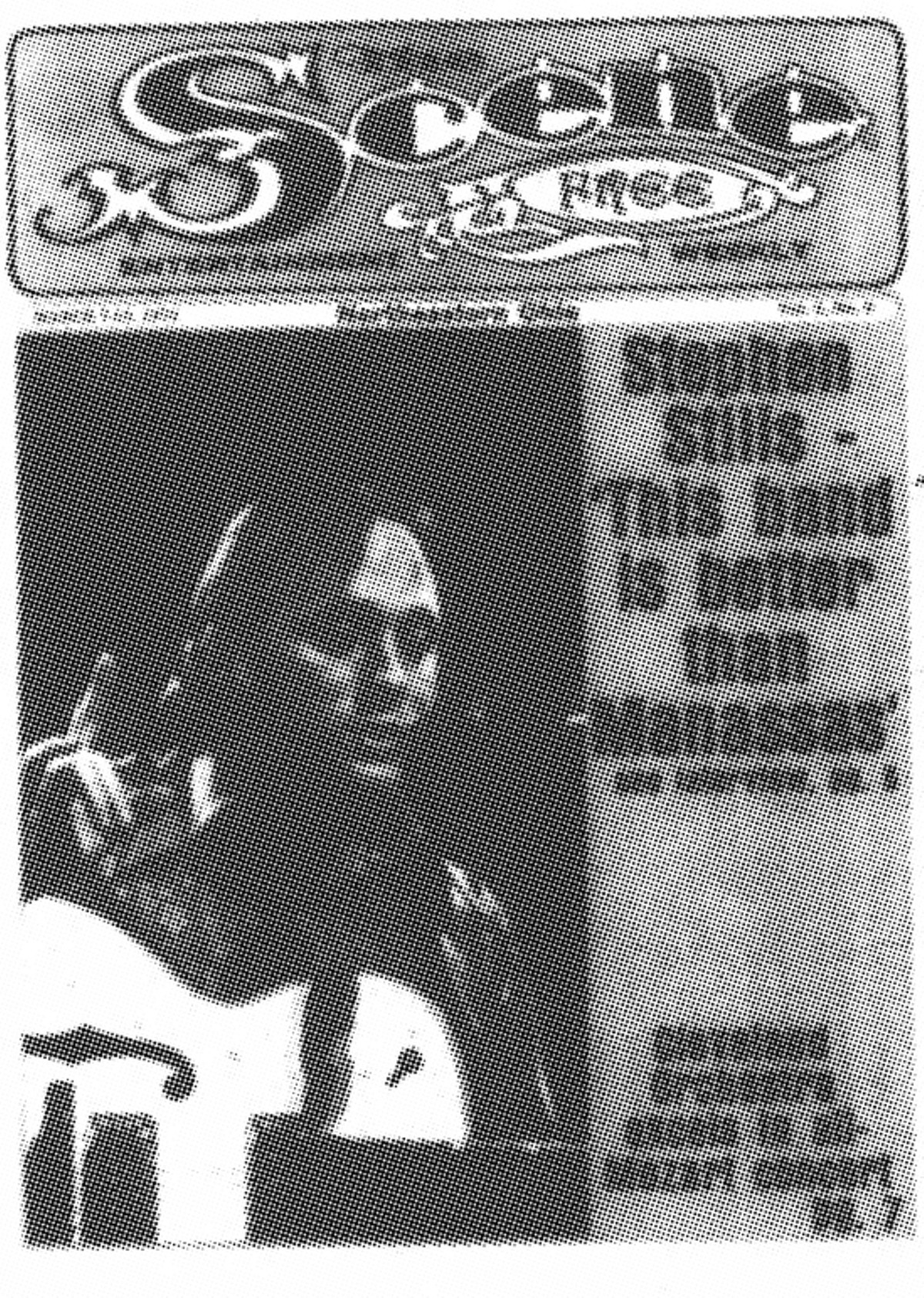 This interview with Stephen Stills by Jim Girard appeared in the issue that came out on March 7, 1974. It featured the headline, "Stephen Stills — This band is better than Manassas," a reference to the band Stills had formed with Chris Hillman of the Byrds.

It all began with a phone call to publicists Gibson & Stromberg, who handle many top artists on tour. Would Stills like to do an interview when he got to Cleveland? "Sure," I was told.

Well, a somewhat disabled and fevered Stephen Stills got into town on Monday to prepare for a Tuesday concert. And after the concert, Stills went into relative seclusion with his French singer-wife Veronique — who, by the way, was eight months pregnant. And it wasn't until about three thousand and twenty-two phone conversations with his road manager, that a Friday morning breakfast interview was arranged.

By then it seemed that his broken ankle, acquired from slipping on ice at Cleveland Hopkins Airport, was healing. Likewise, his 102-degree fever had subsided. Stills, of course, hadn't planned on spending five days in Cleveland, Ohio.

Yet, the legendary musicians' musician had managed to do some serious drinking the night before, as evidenced by his eyes that morning. But eggs, toast and gallons of juice, milk and coffee began to focus his eyes on things and stop his babbling about the previous evening's party. After a short discourse about impeaching president Nixon (something Stills has been encouraging for years, if you'll recall), he began the interview.

SCENE: Is this your last tour for a while, considering Veronique is having a baby?

STILLS: I really don't think so, but I don't know. I've got to finish by new album first (working title is MY FAVORITE CHANGES). It was supposed to be finished before this tour, but it didn't happen. You can't just say 'I'm going to have this finished by next Friday.' Because when next Friday comes, you may only have the bass and drums recorded. And since tours have to be planned months in advance, you have to drop everything and go out and play for a few months ... it's the new American efficiency, you know.

SCENE: You played the title cut from the new album ("My Favorite Changes") the other night and you said it was a combination of some other songs. Just which ones are they?

STILLS: Well let's see. First off it's "Rock And Roll Woman," which begat "Questions," which begat Neil Young's "Cinnamon Girl." They're all built on the same chord structure ... you know, an F, Dm7 and so on.

SCENE: What about the tracks you were supposed to have recorded in Colorado with Veronique. Are they duets or is it stuff like on her Elektra album that was released here?

STILLS: No. I just gave her my new band and told her to do some things. She cut a couple of sides and I helped with the production. She'll be on her own again, but right now she's concentrating on being a mommy. The baby should be due around mid-April.

SCENE: What about the new band? You've got Barnstorm's Kenny Passarelli on bass. I know you've used him before, but it's beginning to look like a permanent thing.

STILLS: Joe Walsh was about to fire his band, Barnstorm. So, Kenny quit. He's in the band for good now.

SCENE: You mean Walsh just went out and broke up his band — just when they were getting really respected and successful?

STILLS: What can I say? Joe went to Hollywood and some cats told him he needed a new band. So, he's getting one now. I think his band was too big anyway; Joe really only needs a bass, drums, and keyboards player behind him ... and maybe not even a keyboard player.

SCENE: How is your new band working out?

STILLS: This band is better than Manassas. We're just getting used to playing smaller halls again. With Manassas we were playing gymnasiums and arenas and Joe, Kenny and I were used to cookin' at that level ... it's rough. People say we play too loud. But this is my best band musically. We get along too. There's no ego thing present.

SCENE: Is your new interest in touring due to change of management or just because of the band?

SCENE: Yes, but didn't the liner notes on BOTH solo albums say something like "Direction by Geffen-Roberts" on the credits?

STILLS: Right, but they slipped that in there themselves. They went to the record company or something. They didn't want everybody to know I'd left them. They're like that.

SCENE: Was Manassas formed when Chris Hillman and A1 Perkins were still with The Flying Burrito Brothers?

STILLS: Yeah. I just asked The Burritos down to Miami to cut some country stuff. Once Rick Roberts heard what was going down, he suggested that Chris and A1 (who were the only ones actually playing with Stills — ed.) join the rest of us and make it a full-time "band. Rick is such a nice guy and he wanted to be a folk singer anyway. There wasn't anything happening with The Burritos either. Rick saw how painfully obvious it was that Manassas was SO good together. It was a natural.

SCENE: Is Manassas formally broken up?

STILLS: It seems that way, but you know how it goes.

SCENE: You played a Neil Young song, "New Mama," in your last set the other night. It's about having a baby. Did he write it for you or what?

STILLS: No. He wrote it about a year ago and could never get the right arrangement for if. He never liked the way it came out. But it was a song that said what I wanted to say, but couldn't. Neil's forte is lyrics, you see. Mine is arrangements. So he never got to cut it, but I wanted to use it. It fits.

SCENE: Do you see Neil Young much anymore?

STILLS: He just sat in with us at Kennedy Center in Washington. It was nice.

SCENE: Is there really going to be another Crosby, Stills, Nash and/or Young album or tour?

STILLS: First date is July 4 in Tampa, Florida. It should be a weird tour.

SCENE: But what about an album?

STILLS: That whole thing is one of the funniest situations imaginable. We're gonna tour first, just to see if we'll feel like doing an album. It's such a touchy thing. But it'll just be an acoustic thing. I think we probably won't use a band. I don't have any idea what'll happen. All I can say is that I sure do like MY band. I'm gonna keep my band; we'll see what happens.

SCENE: What's the thing about CSN&Y that is so complex?

STILLS: Don't ask. As far as I'm concerned Crosby, Stills, Nash and Young is a myth; it's really always just been an extension of the Buffalo Springfield.

SCENE: So what about The Buffalo Springfield reunion thing. Is that ever gonna happen, considering Richie Furay is recording with Chris Hillman and John David Souther?

STILLS: Again, as far as I'm concerned, if Neil Young and I play on the same stage at the same time; that's the Buffalo Springfield. Richie wasn't that crucial. (He pauses and thinks about what he's said.) I know David Geffen wouldn't dig me saying that. Richie wouldn't either, but that's it really.

SCENE: You don't even have a name for the band yet, do you?

STILLS: Hell. We've been trying to come up with a name for weeks now. How about Stephen Stills and "Dialing for Dollars." Or Stephen Stills & The "Price Is Right." It's gotta be a good name. Actually, I think we have a name. We're gonna call it STEPHEN STILLS & LOMACHS. It's a word one of our roadies uses constantly; he used to work for Jackie Lomax, but we don't want to spell it that way. He calls everybody and everything a "lomachs."