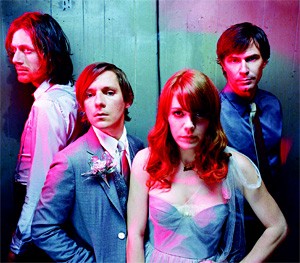 On last year's Under the Blacklight, Rilo Kiley's Jenny Lewis and Blake Sennett celebrated the end of their relationship. The one-time couple called it quits before recording the indie-pop band's fourth album, which documents the breakup in songs like "Silver Lining" and, um, "Breakin' Up" ("Ooh, it feels good to be free," sings Lewis). It's sorta like Fleetwood Mac's Rumours — with all the L.A. sparkle, but none of the Hefty bags of coke. To prep you for Rilo Kiley's show this week, we offer the best breakup albums ever made.

Bob Dylan
Blood on the Tracks
The Lovebirds: By 1974, Dylan's nine-year marriage to Sara Lownds had pretty much crumbled. Dylan wrote the bulk of the record while separated from his one-time muse (who was the inspiration behind Blonde on Blonde's "Sad Eyed Lady of the Lowlands"). Except for a couple of cuts that sound like they were influenced by the singer-songwriter's role in Pat Garrett & Billy the Kid, the album chronicles the end of an often-turbulent relationship.

The Aftermath: The pair divorces in 1977. Meanwhile, Dylan takes the disastrous Rolling Thunder Revue on the road, finds God, and spends the better part of the next 20 years sinking under the weight of one shitty album after another.

Fleetwood Mac
Rumours
The Lovebirds: You need a detailed flowchart to tie together all the elements here. Main songwriters Lindsey Buckingham and Stevie Nicks broke up; so did John and Christine McVie — she was having an affair with one of the band's road crew. Plus, drummer Mick Fleetwood was separated from his wife. Rumours and its chart-topping singles — "Go Your Own Way," "Dreams," "You Make Loving Fun," etc. — are all about those cracked relationships.

The Kiss-Off: "Damn your love, damn your lies/And if you don't love me now, you will never love me again." From the group-written centerpiece "The Chain."

The Aftermath: The 1977 album sells a gazillion copies, Mick Fleetwood begins an affair with a rebounding Nicks, and Buckingham holes himself up in the studio to work on the brilliant but flawed Tusk. Meanwhile, everyone does tons of coke and acts like nothing's changed.

Marvin Gaye
Here, My Dear
The Lovebirds: The legendary soul singer met Anna Gordy — the 38-year-old sister of his Motown boss, Berry Gordy — in 1960, when he was only 21. By 1975, the Gayes' decade-long marriage was falling apart because of Marvin's tendency to screw women by the van-load. Anna filed for divorce. Marvin, strapped with various palimony payments and a nasty drug habit, had no money. But his attorneys figured out a way for the R&B star to pay his ex-wife: Anna would receive half the royalties from his next album. So Marvin got to work on his most deliberately uncommercial record — an angry, vengeful piece, filled with eight-minute free-falling epics about the end of his marriage.

The Kiss-Off: "I guess I'd have to say this album is dedicated to you/Although perhaps you may not be happy, this is what you want/So I conceded/I hope it makes you happy." From the opening you-want-an-album?-here's-your-fucking-album title tune.

The Aftermath: Unsurprisingly, nobody buys the record. Critics hate it too. Motown pulls the plug on promotion, and Gaye goes into exile. Anna even considers suing her ex. A quarter-century later, Here, My Dear morphs into an uncompromising classic.

Bruce Springsteen
Tunnel of Love
The Lovebirds: After 1984's Born in the U.S.A., Springsteen was the biggest rock star on the planet. He sold out stadiums, dominated the charts, and dated hot actresses — like Julianne Phillips, who was in a bunch of TV movies nobody ever heard of. They married in 1985, but by 1987, the working-class Springsteen realized just how little in common he had with his Hollywood wife. Tunnel of Love is all about self-doubt and the failing marriage.

The Kiss-Off: "It's the same thing night on night/Who's wrong, baby, who's right/Another fight, and I slam the door on another battle in our dirty little war/When I look at myself I don't see the man I wanted to be/Somewhere along the line I slipped off track/I'm caught moving one step up and two steps back." From "One Step Up," in which the married Bruce catches the eye of some girl at a bar and promptly hides his wedding ring.

The Aftermath: The couple divorces in 1989, Springsteen hooks up with a nice Italian girl, Patti Scialfa, has three kids, and resumes writing songs about blue-collar folks looking for the promised land on their day off.

Richard & Linda Thompson
Shoot Out the Lights
The Lovebirds: A year after Richard Thompson left British folk-rock icons Fairport Convention, he married singer Linda Peters. They made six albums together between 1973 and 1982; Shoot Out the Lights, symbolically, was their last. A pregnant Linda couldn't immediately promote the record, so Richard went out on the road alone — and quickly hooked up with the woman who put together his tour. The album was written and recorded by Richard and Linda as their marriage was disintegrating, as songs like "Don't Renege on Our Love," "Walking on a Wire," and "A Man in Need" make pretty clear.

The Kiss-Off: "They found some fingerprints right around her throat/They didn't find no killer, and they didn't find no note." From the murdered-woman tale "Did She Jump or Was She Pushed?" Yes, it's a metaphor.

The Aftermath: The Thompsons divorce soon after Shoot Out the Lights comes out. It's a huge critical hit, so the barely speaking Thompsons hit the road together. The tour doesn't go too well. Richard and Linda then spend the rest of their lives talking about the bitch and the bastard who inspired their best songs.