Riot at the Rock Hall 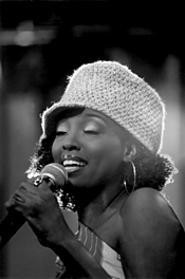 Walter Novak
Conya Doss wows the crowd at the Scene Music Awards Showcase.
It began with tongue wags and devil horns. It ended with goading Brits and a debauched dance floor. In between, there was plenty more impertinence toward legends and livers alike.

"The Rolling Stones, Billy Joel, James Taylor . . . ah, fuck 'em," Cobra Verde frontman John Petkovic gibed as he surveyed his surroundings at the onset of the band's set at the 2002 Scene Music Awards Showcase, held July 18 at the Rock and Roll Hall of Fame.

Yeah, and screw bloated, overserious awards shows, too. We wanted nothing so formal. No envelopes, no acceptance speeches -- that stuff would come later. Besides, with drink tickets in hand, we're all winners, no plaque necessary.

And what better band to get the night started than the Signoffs, five attitudinal upstarts whose drunk-and-disorderly sound is pretty much a hangover-in-waiting? "Come up here . . . and blow me," spindly singer Sim Ross sneered as his band tore into a set of randy, sweat-soaked rock and roll. Ross worked the stage like a strutting cock, all curled lip and bare midriff. "We're on our way," he bellowed during the band's last song, and indeed they were: The Signoffs left for a month-long tour the next day. If this bunch can duplicate the kind of bawdy, heedless performance it gave on this night, it should win plenty of converts.

If the Signoffs' set was overheated, Conya Doss lowered the mercury with a performance that radiated cool. Dressed in a lavender wrap, Doss was pretty and playful, gliding across the stage with a smile as luminous as her blithe funk workouts. With a voice that's equally tender and tensile, Doss exhibited striking range, interspersing candied soul with touching torch songs. Star producer Tony Nicholas (Backstreet Boys, Joe) backed Doss on keys, mouthing nearly every word passionately and shaking his head, as if what he was hearing was too good to be true; a trio of singers and a three-piece band filled out the sound. Doss ended with her hit single, "Coffee," a shot of sunshine that neo-soul wunderkinds Jill Scott and India.Arie would be proud to call their own.

Doss's set left everyone in good spirits -- and most of them consuming good spirits. The only hitch was that booze wasn't permitted on the stage level, and it became increasingly difficult to pull lushes away from the bar as the night wore on. Rockers Cobra Verde paid the price for it, drawing a modest crowd, while the V.I.P. lounge and the downstairs bar were packed.

"I'm in rock and roll heaven," Petkovic announced sarcastically. Still, Petkovic's irritation seemed to drive Cobra Verde that much harder, and the band turned in a charged, white-knuckle set. Petkovic bounced up and down as if treading barefoot on hot asphalt, while the rest of the band bared their teeth in impressive fashion, ripping through new tunes like the smokin' "Modified Frankenstein," a cut as monstrous as its name implies. Throughout the band's set, producer Nicholas was seen at the side of the stage, dancing along, as were many of the folks downstairs. The band ended with a hard-hitting take on Pere Ubu's "Final Solution."

But the evening's hardest hit -- aside from our bar tab -- was the booming, 10-story sound of the Lo Fidelity Allstars. Though there were still stragglers at the bar as the band took the stage, that changed quickly. "To all the lazy people downstairs, get another beer and buy a Creed album," DJ Kevin Ward chided, and as the Allstars' unsinkable disco began to register, the place came alive with barbarous beats and bodies in motion.

"If you don't feel this, you should be at home with your parents," bassist-vocalist Andy Dickinson bellowed, as the band broke into "Lo Fi's in Ibiza," a glorious slab of seismic big beat. Throughout the set, Dickinson would rear back like a baseball pitcher, delivering the beat at the end of his windup and grinning throughout, while Ward served as the band's spark plug, inciting the crowd and wreaking havoc on the turntables. The band finished with the aptly titled "Disco Machine Gun," a song as sweaty and breathless as the crowd itself. It was a fitting conclusion to the 2002 showcase: Though the party had ended, the parched folks working it on the dance floor had their next excuse to drink.