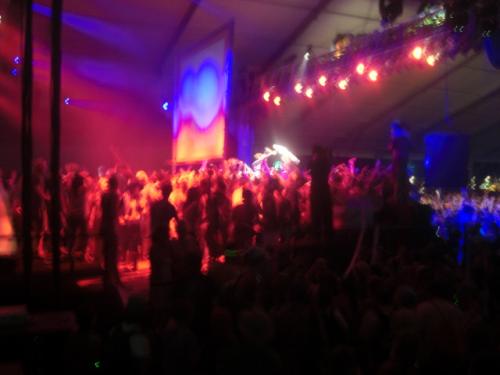 Media folks and fans alike were hopping barricades and stomping over security and stagehands to dance away on That Stage late last night. Everyone was piled on top of each other, shaking the entire tent. Onstage: Girl Talk.

He and his crew also provided ridiculously oversized blow-up couches, pillows and chairs to the glow-stick-wielding crowd. Everyone jumped, shimmied and flung body parts around. And it was a ridiculously good time.

The ability Girl Talk has to pull the best hooks from Top 40 (going all the way back to when Top 40 was first invented) is uncanny. And the audience ate it up. People were even crowd-surfing onstage.

But the dancing and surfing wasn't going on just there. It stretched all the way back in the pavilion (which is about the size of our own Time Warner Cable Amphitheater at Tower City) and to the lawn, where bouts of mud-wrestling caked the already-ripe campers late into the night.

The late-night lineup started with Crystal Castles' shrieks and squeals. Their set was filled with MGMT-like hooks, but the music didn’t develop much beyond that. Still, they were a perfect lead-in to Girl Talk.

Sometime late last night it happened: I went 'Roo-happy. No more thoughts of busting home early and heading to a hotel and enjoying a real shower in something bigger than a sink. Nope. I'm having a damn good time. —Carissa Bowlin