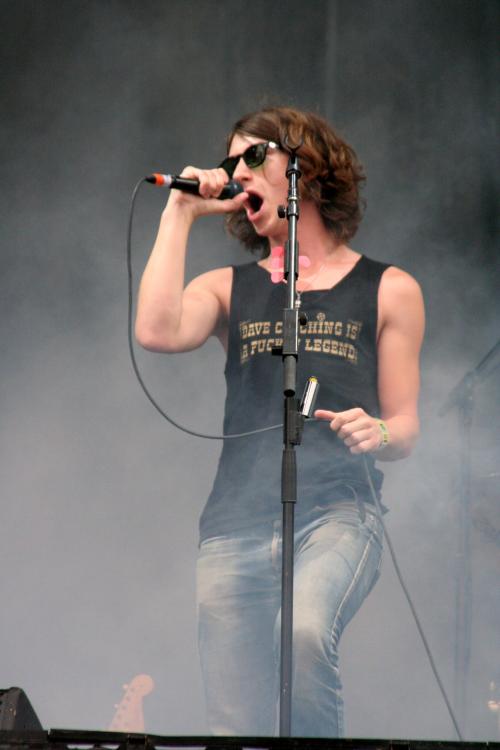 Day two of Lollapalooza started with a Playboy brunch at the Hilton, which overlooks the Grant Park festival grounds. The brunch was essentially a mass-marketing endeavor designed to promote both the mag and some new Axe body spray that smells like leather. While we suspected the so-called Playmate hosts were really just a handful of hot tramps culled from local strip clubs, the views from the penthouse suite were phenomenal, and Chicago-based DJ J Rose provided a steady mix of contemporary hip-hop tracks as he huddled over two turntables and a laptop.

Los Campesinos! were elated to return to Lollapalooza, where two years ago they played their first-ever stateside gig, and the Cardiff kids gave a high-energy, celebratory performance. The Arctic Monkeys jittery Britpop translated well on the fest’s main stage, and punk rockers Rise Against delivering a rousing set before a hometown crowd.

Animal Collective chose to emphasis the ambient side of their electronic-based music, alienating many of their ardent fans and losing the attention of potential new ones.

Even though frontman Maynard James Keenan huddled in the shadows for most of a 90-minute set, headliners Tool were one of the day’s highlights. The band’s lacerating guitars, dark videos and constipated vocals really resonated, and the group sounded tight. Sonically dense songs like “Schism” certainly overpowered the more pretentious art rock of Coheed and Cambria, who played the same stage earlier in the day — though Coheed’s cover of the Church’s “Under the Milky Way” really sparkled. —Jeff Niesel