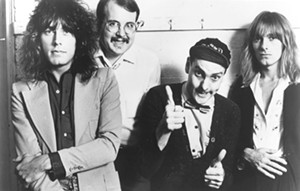 The Rock and Roll Hall of Fame and Museum has just announced that it will host an exclusive live broadcast of the Induction Ceremony, which takes place this year at the Barclays Center in New York.

Outside of the Barclays Center, the Rock Hall will be the only place to watch the Induction Ceremony on the night of the event. Doors for the simulcast open at 6:30 p.m., and the broadcast begins at 7 p.m. A Rock Hall member presale will begin at 10 a.m. on Tuesday, Feb. 16, and tickets for the simulcast will go on sale to the public at 10 a.m. on Wednesday, Feb. 17, via tickets.rockhall.com, and at the Rock Hall’s box office.

The Rock Hall has announced that special guests for this year’s Induction Ceremony include the Black Keys, Rob Thomas and Metallica's Lars Ulrich. Details about performances and presenters will be announced at a later date.

In addition, the Rock Hall has announced that Bert Berns, who produced 51 chart records in seven years, will receive the Ahmet Ertegun Award for Lifetime Achievement. The Beatles, Rolling Stones and Led Zeppelin all recorded some of his songs, and Janis Joplin famously recorded a version of his “Piece Of My Heart,” a song he wrote and produced for Erma Franklin, Aretha Franklin’s sister.

Tickets for the 31st Annual Rock and Roll Hall of Fame Induction Ceremony, which takes place at Barclays Center in Brooklyn, New York, on April 8, go on sale to Citi Cardmembers at 10 a.m. on Monday, Feb. 1, at citiprivatepass.com. For additional ticketing information, visit Ticketmaster.com. Remaining tickets will go on sale to the public at 9 a.m. on Friday, Feb. 5. The Induction Ceremony will premiere on HBO in April.

The list of bands snubbed by the Rock and Roll Hall of Fame and Museum is about to get a whole lot shorter. The Rock Hall has just announced that Cheap Trick (pictured), Chicago, Deep Purple, N.W.A. and Steve Miller will be inducted at the ceremonies set to take place on Friday, April 8, at Barclays Center in Brooklyn. HBO will broadcast the ceremony in spring of 2016.


The Rock Hall counted the votes of more than 800 voters of the Rock and Roll Hall of Fame Foundation as well as the aggregate voting results of the Rock and  Roll Hall of Fame’s online fan vote. The top five artists, as selected by the public, comprised a “fans’ ballot” that was tallied along with the other ballots to determine the 2016 inductees. Three of the top five artists from that ballot will be inducted in 2016.

Tickets for the Inductions go on sale to the public in February. A limited number of pre-sale tickets will be available for Rock and Roll Hall of Fame members in advance of the public sale date. To be eligible for that pre-sale, you must be a Rock and Roll Hall of Fame member by Dec. 31. The Rock Hall will announce exact sale dates and ticket information relating to the Inductions in January.