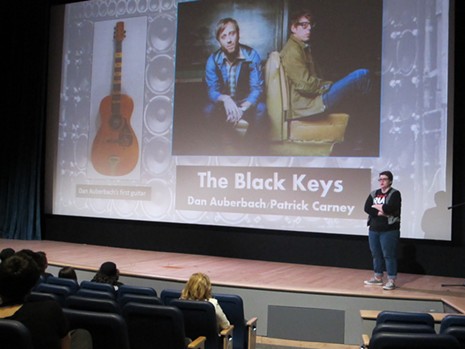 While Live Nation’s Barry Gabel, one of the organizers behind the annual High School Rock Off, likes to tell young musicians that they shouldn’t plan to become successful with their original lineups, there are exceptions to that rule. Bands such as U2, the Black Keys and Radiohead started when members were in their teens and somehow preserved  their original line-ups even as they became superstars.

As a way of educating the teens who participate in this year’s competition, the Rock Hall has introduced a new “master class” to the Rock Off that kicked off on Saturday at the Rock and Roll Hall of Fame and Museum. Before the competition began, the Rock Hall’s Stephanie Heriger introduced the bands to some of the acts that began their careers at a young age. “You should think about where you are right now and where could be in 15 or 20 years,” she told the group as she showed it a picture of the Black Keys, the Nashville-via-Akron duo that went from playing small clubs in Northeast Ohio to performing at some of the biggest venues in the world.

Then, she spoke about Radiohead, whom she described as “one of the most acclaimed bands out there.” She then played one of the band’s early demos and compared it to a live recording from a 1997 appearance at Glastonbury, the huge UK festival. She also spoke about the Shirelles, one of the leaders of the Girl Group movement of the 1960s, and explained how they first formed in 1957 for a talent show. She concluded the class with segments on the O’Jays and Green Day.

Each week, a Rock Hall representative will meet with the Rock Off bands before they take the stage to present a “class” that will serve as a form of inspiration. The High School Rock Off takes place each Saturday in January at the Rock and Roll Hall of Fame and Museum. Finalists participate in a "Final Exam" on Feb. 13.