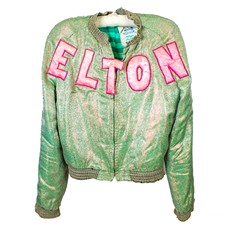 Courtesy of the Rock Hall
Each year, Rock & Roll Hall of Fame members play a role in determining a new artifact to be exhibited at the Museum. At the Membership Appreciation Day event held this past weekend, the Rock Hall announced the winning item — Elton John's "Hercules" stage suit.

Known for his flamboyant costumes, Elton John, who was inducted into the Rock Hall in 1994, wore the outfit both onstage and in photo shoots. The trousers feature the word "Hercules" appliqued down both legs. The outfit, which will remain on display through next year’s vote, is now featured in the Ahmet Ertegun Main Exhibition Hall, adjacent to the Right Here, Right Now exhibit.