These ghoulish tales will make you wet your pants with fear! 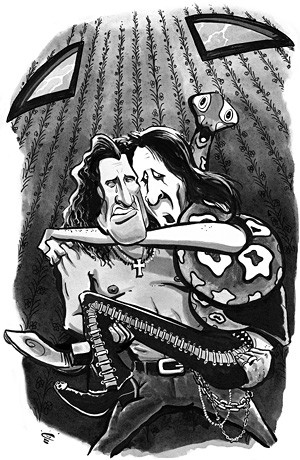 Most ghost stories are pretty damn lame, and most happen to everybody except musicians. If you attempt to seek out ghost stories from pop stars, you quickly discover that phantoms, freaky psychic phenomena, and even UFOs aren't nearly as numerous as popular culture has us believe. In fact, one might estimate that maybe one in five musicians has something to say on the subject, and when they do, odds are it's just about as exciting as the story your neighbor Hal tells about his mother-in-law's first cousin seeing her dead uncle take a bath in the family cottage.

But hey, Halloween is here again. After several months asking rock stars questions like "Have you ever had an encounter with the supernatural? No, not the lame television show!," we've collected some stories that might scare a toddler, and others that are almost as scary as a Stephen King novel. And like any good horror movie, they get more thrilling as you go along, so get out the garlic and spare proton pack, and brace yourself for the rock-star ghost diaries.

James Valentine, Maroon 5: "[We recorded our latest, It Won't Be Soon Before Long, in Rick Rubin's allegedly haunted house]. One night, I saw a figure walking up the stairs, when there was nobody else in the house except my girlfriend at the time. I was so certain that I'd seen someone that I called out to this thing and then went up to the room that it had walked into. There was nobody there. I don't know how to explain it, but that's what I saw. I got the impression it was a woman, and apparently other people had talked about a female spirit that they had seen."

Creep Factor: 4 out of 10. Odds are, it was just one of the girls that impossibly good-looking Maroon 5 frontman Adam Levine was banging between sessions.

Steve Bays, Hot Hot Heat: "I used to always play drums in bands. I grew up on an island, and there were never many good drummers. I always wanted to switch up and play different instruments, though. I met a guy who could play drums — and hard-hitting drums. At the time, I basically wanted to play metal or at least heavy music. [So] we formed this band together, and on the night of our first jam, we drove forever out to his place — this really forested area. He hadn't drummed in a year, because, he said, he'd been drinking and into drugs for that year. But he said, 'I've quit now.' So I played guitar. He played drums. But I remember he was sweating a lot through the whole damn thing. Rehearsal was great. I go home, and that night I have this really crazy dream, where I go into the bathroom and see this guy in the mirror. He's basically saying goodbye to me. This ghostly figure in the mirror is saying goodbye to me, and he gives me this necklace — this medallion. I didn't make anything of it, but I clearly remembered him saying goodbye to me through the mirror. The next day, I heard three hours after the jam, he died. His heart stopped. I guess his body was so run down that drumming for three hours essentially killed him. It's creepy. When he died was basically when I had the dream."

Creep Factor: 7 out of 10. Seriously, Steve, you could've just given the guy a break. Your unwillingness to let an ex-addict rest his weary heart is the scary stuff here.

Alice Cooper: "I get out of rehab [in 1983], and [Aerosmith guitarist] Joe Perry got out of rehab at the same time. I was going to write two songs for this movie I was going to be in and thought, 'I'll call Joe, and we'll do this together.' My manager set up this house in upper New York. Joe's assistant went up there. My assistant went up there. We checked into this big old house in the middle of farm country — this big gothic-looking thing. I'm putting my clothes away. I leave the room and come back, and the closet door is closed. The drawer I was packing is closed. Hmm, I don't remember closing that. This house was so full of whatever that on the second night we're there, we're sitting there eating dinner, and it sounds like somebody is moving furniture in the basement. It's making so much noise. It's not even trying to be subtle. I say to Joe, 'We're the only ones here, right?' I'm not going down into the basement to find out what's down there. I say, 'This house — every time I put my coat down, I come back and it's gone.' Joe says, 'The same exact thing is happening to me too. I thought I was just going through a recovery thing — being forgetful.' I say, 'No, this place is insane.' So we ran out of the place. I found out later this is where the guy who wrote The Amityville Horror wrote the story — there in that house."

Creep Factor: 10 out of 10. Hire Bruce Campbell to play Cooper, Lorenzo Lamas to play Perry, and this poltergeist caper could become next year's biggest Hollywood blockbuster!