Role Model in the Making

Country singer Debrae hopes to parlay looks and talent into something more. 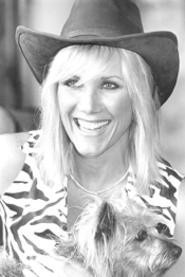 Walter Novak
Debrae cuddles with her terrier, Rascal.
Relaxing in her spacious two-story home on a wooded lot in Medina, Debrae looks like a pop diva. She's wearing a sleeveless zebra-patterned top, cut low enough to reveal a tad of cleavage, and hip-hugging black pants that are just tight enough to show off her curvaceous figure. The local country singer has more than one look, too. On the back of her self-released debut, Desperate Heart, there's a picture of her lying on her back with her jeans unbuttoned and her midriff exposed, while on the fliers for her upcoming gigs, she's dressed in a sassy black leather outfit that's equal parts Shania and Britney. Debrae herself admits that, in the world of country music, she's a "nobody." But she's got the looks and the vocal power to stack up to country's new female stars, glamour girls who are as much pop as country.

"Shania is great," says Debrae while perched on the sofa in her living room. "I think that, when you're sitting there watching a concert, you should have something more interesting to see. She does. When I first went out to Nashville, that was the buzz. People were talking about how country was mad at Shania. But she made country a lot of money. She had her records in country before [producer] Mutt Lange came along. Crossover radio was a lot more friendly to her than country was. I don't know why anybody would be mad at anybody for trying to get their music out to as many people as possible."

Debrae (she prefers to go by only her first name because her last name, Barensfeld, is "just too long") was raised in Northeast Ohio and studied theater at Kent State and the University of Akron. She performed in school plays and musicals, but seriously got into acting and singing when she moved to Los Angeles after finishing college. Once there, she got a part in a Las Vegas show called "Playboy's Girls of Rock and Roll." She points out that she's never posed nude (although Playboy asked, more than once) and maintains that her image is clean-cut and wholesome, despite the association with Hefner's adult magazine. She even turned down an opportunity to work as a body double in a film that starred Theresa Russell.

"They wanted me to lay in the bathtub and pretend that my wrists were slit," she recalls while petting her frisky terrier named Rascal. "I said, 'I don't think I can do that.' I'm shy. I know that I don't seem shy, but when it comes to stuff like that, I am. There would be how many different people in the crew standing around shooting that scene? That's like Playboy. They'll tell you there will only be two people there -- whomever you're most comfortable with and the photographer. Yeah, and a half a million people looking at the pictures when I'm done. I don't think so."

Debrae says that performing as part of "Playboy's Girls of Rock and Roll" was nothing but a positive experience (especially when she became the "pin-up girl" who had her image on billboards to promote the shows). It helped get her a development deal with Atlantic Records and taught her what to do to become successful on her own.

"It was one of those better-than-I-could-have-ever-asked-for jobs," she says. "It helped me be a more rounded person. I've seen so many different sides of life -- the good and the bad and the sneaky and slimy. It helps me when I write. It helps me all-around feel comfortable in this industry. The business part of it is so fun for me now. I had to work for those people for so many years, and now I get to do it for myself."

About 10 years ago, Debrae became pregnant and moved back to Ohio to raise her daughter. She continued to act, taking small roles in regionally filmed movies and the occasional part in corporate training films. But when she got the itch to make an album, she went to Nashville and found investors willing to finance the making of Desperate Heart. She hired producer Robert Etoll (Jennifer Love Hewitt, Reba McEntire) and recruited session players such as bassist Rico Topazio and pedal steel guitarist John McDuffie to back her on the album. Although she's only self-released the record on her own Crusade Records, she's been selling it on her website (debrae.com) and is trying to get national distribution. And she's not about to apologize for adding some glitz to the country genre.

"I want to do something more like Shania," she says. "I want to do the showmanship, too. I think that country could use a little bit of performance, rather than just the songs. The songs are great. They're storytelling, and country has a lot more that people can relate to, but I think it's time to give it a little more showmanship. You go to a rock concert, and there's always more stage stuff going on."

For her upcoming concerts in the Cleveland area (which will be her first), she's recruited a band of regional musicians that includes bassist Mark Malysa, drummer Tim Sprow, keyboardist Randy Harper, guitarist Dave Barker, and pedal steel guitarist Jim Klein. They will also back her when she headlines the Roy Orbison Festival on June 9 in Wink, Texas, and when she plays at the Independent Music Fest in Nashville the weekend of June 14-16 (the same week as Fan Fair, the annual event that allows country fans to meet the stars). In the meantime, she's still acting to "pay the bills" and has auditioned for a role as a customs agent in The Year That Trembled, a film, based on local writer Scott Lax's book about youths drafted into the Vietnam War, that will begin shooting in Cleveland later this month. Debrae maintains that her good looks are only one of her selling points and that, at heart, she's a genuine role model.

"I think if everybody would get to know me and what kind of person I am, hopefully that would make them more intrigued," she says. "I wanna be the type of person that a young girl would like to be. I'd love to be an inspiration. I'd love it if girls would e-mail me and ask me for advice. I just want to be able to help people, and if I have to do it through the music, that's fine."