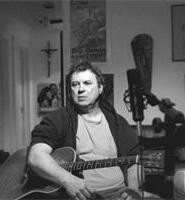 Attorney by day, roots rocker by night, David Childers does it his way.
By all rights, David Childers should be feted for releasing one of the best roots records of the year: Jailhouse Religion, a veritable rock-history primer that glides expertly between honky-tonk, blues, country, Tex-Mex, bluegrass, and '80s rock.

But if Americana radio and labels can't be bothered, neither can Childers.

"Hell, no, they're not interested in me," says Childers, in a voice like a rough patch of gravel road, "because I'm 54 years old, for one thing, missing a front tooth, and I ain't got the right haircut."

Instead, the burly guitarist from Mount Holly, North Carolina, and his band are still scuffling on the outskirts of the roots-rock revival, making converts the old-fashioned way: one sweat-soaked gig at a time.

"[Americana] labels are either looking for someone that's real established, with a history, like Guy Clark or Emmylou Harris, or somebody that's young," Childers says. "There's this kind of clubby thing about it that I can't break through and never will. But I don't give a fuck. It's like Buck Owens and Nashville; Buck did his own thing, and that's what we do."

Childers doesn't exactly fit the Americana mold, anyway. Though you'll find him with an acoustic guitar strapped across his back at live shows, Childers and the Modern Don Juans are first and foremost a rock band. His records, especially 2003's Room #23 and Jailhouse Religion (Little King/Lucky Dice), are informed by Jason & the Scorchers and AC/DC as much as they are Merle Haggard and Bob Dylan.

Propelling Jailhouse Religion is the lockstep rhythm section of his son, drummer Robert Childers, and bassist Mark Lynch, as well as the chameleonlike guitar talents of Randy Saxon. The songs run the gamut of roots rock -- a fact that the pitch-perfect sequencing highlights without showing off.

"Strayaway Child" is vintage Scorchers riff rock, "Bottom of My Bottle" is soulful blues, and the graceful "Roadside Parable" is trumpet-inflected Tex-Mex worthy of Joe Ely. Saxon's banjo and mandolin runs, as well as Childers' duet with Jill Lurie, are highlights of "Chains of Sadness" reminiscent of the Louvin Brothers, while "Down Below" is a wistful, sitar-accented elegy, and "Dance Macabre" is Goat's Head Soup-era Stones-meet-AC/DC (complete with a "For Those About to Rock [We Salute You]" guitar quote).

"When Randy came on board (prior to the release of Room #23), we got real disciplined about our practicing, and the practices just developed into songwriting sessions," Childers says. "I had felt very burnt-out, like I had exhausted my reservoir of musical ideas. Mark and Robert and Randy started coming up with some, which freed me to write lyrics. In the past I'd write a song by myself, bring it into the band, learn it, play it, boom! This time it was like four guys working in a garden and coming up with some different vegetables."

Childers' earthy lyrics are a mix of pentecostal fervor ("Voice of the Devil," "Dance Macabre"), hard-living philosophy ("Bottom of My Bottle," "Over the Limit"), small-town regret ("No Pool Hall"), and history lesson ("George Wallace," "General Belgrano").

Childers is drawn to the gray areas of the human condition, and his characters typically abide in the crucible between morality and sin, drink and sobriety, hope and desperation. Some songs feel thoroughly lived-in -- almost uncomfortably so, in the case of "Bottom of My Bottle" -- while others use historical figures or events for a more detached view of human folly.

Like many a musician, Childers still has a day job, though it's more unusual than most -- he's a Social Security disability attorney.

"The music's a great reward I get for working hard to try and help people," he says. "It's a karmic thing. I made a decision at one point in my life: I didn't want to just be a writer or a musician; I wanted to do something to help people, to serve humanity. I felt like my whole life up until my 20s was just selfish; it was just all about me and what I wanted."

Not that he's preaching altruism or personal responsibility. "Hell, I don't try to tell other people what to do," he says. "It's just what makes me feel better about myself."