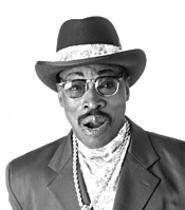 The master of blaxploitation is back. The sexually explicit rhymes of Rudy Ray Moore (aka Dolemite), considered the predecessor of rap, had to be sold from behind the counters of record stores brave enough to carry them. Even in the '70s, when the sexual revolution should have made such expressions trouble-free, his "party" albums such as Dolemite for President, Eat Out More Often, and I Can't Believe I Ate the Whole Thing seemed to tease the bounds of open-minded liberalism, even while his appearances in such blaxploitation flicks as Dolemite, The Human Tornado, and the ultimate Petey Wheatstraw: The Devil's Son-in-Law made him an underground cult superstar of sorts. With his 1997 release, The Hip Shakin' Papa, we found the mack daddy making his singing debut surrounded, as usual, by a menagerie of glistening, seam-stretching babes. Sadly, Moore is more adept with sleaze than soul, and only the rumbling lesbian lament "Willa Mae" gets the juices flowing in that old-fashioned Dolemite way. Thankfully, Moore has musically minded fans who, inspired by his lowbrow career, are determined to keep the X-rated party-album legacy alive.
Scroll to read more Music News articles
Join the Cleveland Scene Press Club