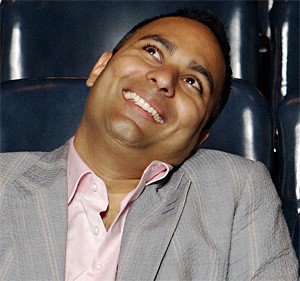 Honestly, we'd never heard of comedian Russell Peters either, but the guy has headlined — and sold out — Madison Square Garden, so we thought we'd give him a chance. And, yes, the dude is funny. He's more a humorist than a joke-teller; over his 18-year career, he's scored hit comedy records like Outsourced, in which he makes social observations based on his experiences growing up in a British Indian family, surrounded by Canada's white culture. "The new show is basically a snapshot of my family from 10 years ago," said Peters, preparing for this tour. "I live at home, my brother lives at home, and my parents are both retired — all of us living under one roof. We're a working-class South Asian family. That's where I come from, and that's what I know."