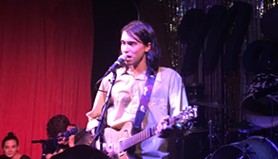 Philadelphia-based singer-songwriter, Alexander Giannascoli, known by his stage name, Alex G stepped on the Mahall’s stage last night to the sound of the Rascal Flatts’ tune “Life Is A Highway,” joking to a packed out room about his walkout song selection.

The choice of music showed just how eccentric the indie rocker really is.

Touring to support his new album, Rocket, Alex G played nearly every song on the album and drew huge yelps and loud applause both during and in between songs, which prompted him to repeatedly thank the crowd.

Alex G, of course, is known for his unusual combination of genres and drawing up on folk, indie rock, lo-fi, experimental pop, noise rock, industrial, country and psych pop. Some of the highlights of the night included the folky ballad and crowd favorite, “Bobby,” which featured one of several appearances from a violinist who helped keep things fresh and light amid some of the band’s noisier bits like the strange, brash, industrial track, “Brick.”

Other standouts included the piano folk track, “Proud,” the acoustic tear-jerker “Powerful Man,” the experimental, auto-tuned “Sportstar” and the psychedelic “Poison Root.” Alex G enjoyed himself as his set was marked by spontaneous and purposeful musical tangents, which made the songs sound both louder and stranger. He often opted to aimlessly, discordantly pound his hands or knees on the keyboard and also let out a few impulsive screams, but it was all in good fun and to the delight of the crowd.

Since most of Alex G’s songs are two or three minutes apiece, he played around 20 tracks during his 75-minute long set, and about three quarters of the way through, he announced that his planned set was over, and he began taking crowd requests. Alex G ended his set with “Brite Boy,” which featured a third and final appearance from opener Michelle Zauner, who before the song started, gave a few bites of her chicken drumstick to Alex G’s drummer and bassist, which the crowd definitely got a kick out of.

While many might mistakenly perceive Alex G’s overall sound and live set as a schizophrenic, disjointed mess, the Mahall’s crowd took it for what it was: a weird, wonderful musical medley filled with strong melodies and raw emotion radiating from one of the country’s most unique, talented and underrated singer-songwriters.

The set ended as it began. “Life Is A Highway” blasted out of the speakers as fans left with smiles on their faces and with memories of a truly genuine, one-of-a-kind performance.

First up was the Brooklyn four-piece Cende, a band whose intriguing mix of jangly power pop and pop punk got the crowd nicely warmed up as they ended their set with an enjoyable duet and appearance from Michelle Zauner, lead singer of the next support band, Japanese Breakfast.

Zauner’s (also of Little Big League) solo project, Japanese Breakfast played next, and they brought their upbeat, experimental synth-pop and indie rock songs to life with Zauner’s contagious charisma and exuberance. She also drew big cheers from the crowd for commenting that Mahall’s trademark tinsel backdrop reminded her of prom night.