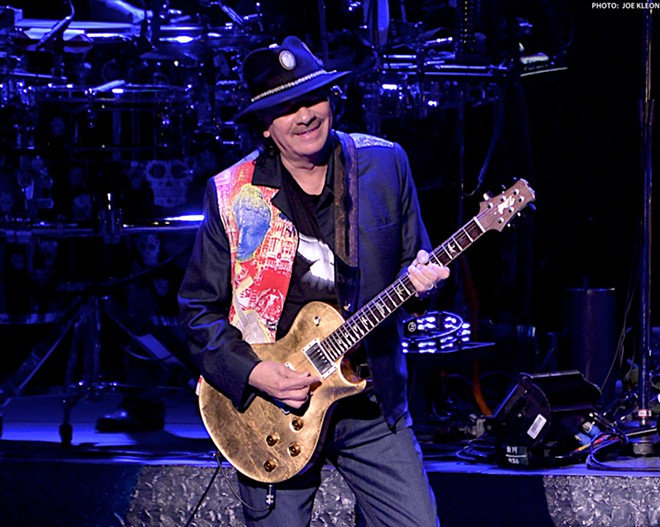 Joe Kleon
Last night’s Santana concert at Blossom commemorated the 50th anniversary of the guitarist’s extraordinary performance at Woodstock, so it made sense that the show would start with footage from that iconic concert.

During the two-hour performance that followed, band leader Carlos Santana showed he hasn’t lost a step. Playing guitar so vigorously that you could see the beads of sweat on his forward, Santana, who wore his signature fedora and a black T-shirt with a giant white dove on it, demonstrated just how captivating a great guitarist could be. While he had two singers with him in his terrific band, the spotlight mostly shone on him, a real anomaly in today’s pop/rock world where the singer is almost always the star.

The show began with “Soul Sacrifice,” a song that featured a gritty guitar solo and heavy percussion, and that gave way to the percussion-heavy “Jin-go-lo-ba,” a tune accompanied by a video featuring an African dance.

Three songs into the 20-song set, Santana turned to “Evil Ways,” one of his big hits from the ’60s. During it, Santana went up to his keyboardist and the two went back and forth with vigorous solos. The song concluded with a very dissonant rendition of the John Coltrane classic “A Love Supreme” that included a bit of wonky trombone.

Santana’s tour also celebrates the20th anniversary of Supernatural, his star-studded hit album that featured guest appearances by Eric Clapton, Rob Thomas, Eagle-Eye Cherry, Lauryn Hill, Dave Matthews, Maná, KC Porter and Cee-Lo Green. As a result, the show featured a slew of songs from that album, including “Put Your Lights On,” a moody number that found Santana standing in the shadows during its beginning and then slowly migrating to the stage’s center to deliver one riveting guitar solo after another. The song segued into “Black Magic Woman,” another one of Santana’s big hits from the early days. Vintage footage of Santana performing throughout the decades showed on the video monitor, and the song featuring particularly soulful vocals. It segued nicely into “Oye como va,” the Tito Puente tune that Santana made famous in the ’70s.

Singer Ray Greene took the lead on “Game of Love,” a tune that featured yet another dynamic Santana guitar solo. Greene gave the song a R&B feel with his rich, soulful vocals. Santana expertly alternated between acoustic and electric guitar on “Maria Maria,” a tune that the band really leaned into. Singer Andy Vargas brought it to a dramatic close by rapping at the conclusion.

Toward the show's conclusion, Santana told the audience to go “Santana bananas” during the song. “If you don’t go crazy, you’re missing out,” he said.

The Doobie Brothers delivered an opening set laden with their hits from the '70s. A vibrant saxophone solo put a punctuation mark on a rousing rendition of “Without You,” and the band played “China Grove,” a track that featured pitch perfect harmony vocals, with a real fierceness. Fans even ushered the group back for a two-song encore that included “Black Water” and “Listen to the Music,” the latter of which found the band pausing to involve the audience in an energetic sing-along.

Between bands, Austin Walkin’ Cane played a set in the VIP area, showing off his guitar skills and dropping in a few choice classic rock covers.

It all made for a great night of music.