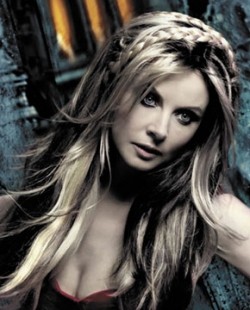 Famous as the muse behind Andrew Lloyd Webber's The Phantom of the Opera, English singer Sarah Brightman is the best-selling soprano of all time. But don't hold that against her. Teased as a child, she first sang in a disco group before experimenting with dance and theater and finally embarking on a solo career. Phoning from Los Angeles, where she's rehearsing for her first tour in four years, Brightman discussed the high-tech approach she's taking with her current stage show as well as the seasonal songs found on her latest album, A Winter Symphony.

You're on your first world tour in four years. Why the lapse?

Because they completely wear me out. I wanted to work on another album. I wanted to do many other different things in between. I did some festivals and did a little movie called Repo! I was working on all this stuff. You need breaks; otherwise you go a bit crazy. To be creative, you have to come off tours for a while. I'm not one to sit in a touring coach and write music. I need to get away from it.

Tell me about the holographic stage technology. Will it really be you performing live or will be a virtual version?

No, it's definitely me. That's why the audience comes. It's a technology that hasn't been used on this scale before. Everyone is real and it's specific worlds that have been created around us. They're not aggressive worlds. They're very beautiful and perfect for the kind of music that I'm doing. It will be a new experience for us. We're not sure what will happen. But whatever happens will be very beautiful.

I love your version of "Silent Night." Was it difficult doing a song that's been done countless times?

With the Christmas album, it was something I wanted to do for years and years. I tend to release albums in spring, and if you do that, you can't release an album at the other side of the year. This time, I just decided to go for it. I knew I was going to tour at the end of the year and then go into a Christmas show. Because I wanted to do it for so long, it wasn't hard to choose the repertoire. I had been thinking about it for a long time. There are some obvious and less obvious ones. I loved doing it. It was great fun.

I love how "I Wish It Could Be Christmas Everyday" is so freewheeling. I didn't know you could rock out like that.

That was quite good fun. It was the last piece we recorded and we nearly weren't going to do it. Listening to the album all the way through, we decided it was be good to have something more uptempo. It ended up becoming one of everyone's favorites, so I'm really glad we did it.

I read that you were teased at boarding school and even ran away. How could those students tease someone so beautiful and talented?

I wasn't beautiful and talented at that time. I probably invited it. I wasn't a particularly social child. I was shy and quite awkward. My voice was my little strength. That was what protected me. I sat with it very closely and used it as my protection and joy as well.

Did you have a short run as a disco singer?

Yes, I did. I was in a group called Hot Gossip many, many years ago. I had my first hit record then with "I Lost My Heart to a Starship Trooper." It was a wonderful time. When you're that young and have all that energy and ideas and ego, it's a wonderful thing to have a hit single. It gives you huge amounts of confidence. You go on tour and it opens your eyes to what is possible. It's how you carry on after that that is important. I was trained in dance and drama so I decided to audition for theater and it was the best move I made. I was able to build myself from there.

How does it feel to be the biggest-selling soprano of all time? Does that put a lot of pressure on you?

Yes. But I don't think about it. I just get on and do my thing and enjoy what I'm doing. You can't always say the right thing or please everyone. As long as you're passionate about what you do, especially in this business. I'm happy to do what I do.