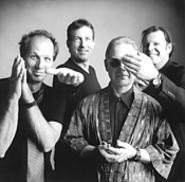 Prog legs: King Crimson, still spry after all these years.
Clevelanders conditioned to classic rock may be disappointed when King Crimson plays the Lakewood Civic Auditorium this week. This is not your grandfather's Crimson. This is a Crimson as tight and modern as it ever was.

"It's really a live band," says Trey Gunn, who plays Warr Guitar in Crimson. "That's where the power is."

And power has become one of the few defining characteristics of the ever-evolving ensemble. If you think King Crimson is all Mellotron washes, big vocals, portentous lyrics, and melodic bombast, think again. If you consider Crimson a geezer band trotting out the familiar, forget it. But if you're open to change, you're in luck, because change is key to the group Robert Fripp launched in 1969 with In the Court of the Crimson King, a template for progressive rock. While the sole Crimson constant is the autocratic guitarist and conceptualist Fripp, flexibility is critical to the band's longevity, which has spanned three creative phases.

In the '70s, King Crimson albums like Court, Islands, and Larks' Tongues in Aspic made the band synonymous with progressive rock. In the early '80s, Crimson's Warner Bros. records, Discipline, Beat, and Three of a Perfect Pair, made the band a front-runner among the ultramodern and the technologically sophisticated. From 1994 till now, its independently released albums have established Crimson as a heavy, adventurous rock band, as memorable for its instrumentals as for the vocals of the mercurial and brilliant Adrian Belew.

"The idea of the band has always been to challenge yourself to do something you haven't been able to do before," says Belew, who writes the melodies and lyrics. "The music we're playing now is as complex as ever -- and difficult to play correctly -- but it's also a return to a kind of heavier, guitar-riff form of Crimson. I think it's more of a rock band than other incarnations. I attribute a lot of that to the rhythm section. [Drummer] Pat [Mastelotto] and Trey are a little younger than Robert and I, and they have a fresher version of what a rhythm section is about. Pat is a heavy-handed rock drummer, and this has led Robert and me to start dabbling in heavy-guitar-riff music. I think it's really appealing, and maybe easier for a younger audience to digest."

Crimson now plays "nuovo metal," which Belew calls "a new version of heavy music. It's not fitting for us to call ourselves progressive rock, because that's a genre that really existed in the late '60s through the early '70s and doesn't apply to what we do now."

The work Crimson will focus on in concert is called "Level 5," also the name of a live EP available only at its shows.

"It's several things," Gunn says of the continually evolving body of work. "It's a piece of music -- a huge monster of a piece. It's just excruciatingly heavy, undeniably heavy and cool. Crimson is clearly a rock band, but we don't use the conventional rock band vocabulary, so it doesn't sound like Slayer or Aerosmith. We would sound really dumb if we were using their vocabulary -- we would, but they don't. Crimson is an anomaly. It's a rock band, which is kind of gut-based music, but we continue to evolve the vocabulary that we speak with, learning and inventing new words and new ways of doing what we're doing."

Crimson may play one or two early songs when it hits town, but the band will largely stick to more modern material and work on new songs for an upcoming album.

"We've got material sitting here now that needs to be turned into songs," Belew says. "Touring has always been, for us, the best way to write and devise our new material and play it out before an audience before recording it. It just takes a final leap, and that's one of the primary reasons for this tour. We're not promoting a new record. We're inventing one."

Belew doesn't even mention the recently released Vrooom Vrooom, a two-disc set of live material from the mid-'90s featuring the "double trio": the current Crimsonites along with Tony Levin and drummer Bill Bruford. Levin, Bruford, Belew, and Fripp were the 1981-'84 Crimson, a far more radical and modern iteration than the original band.

"I've never spoken to him, actually," Belew jokes about the press-wary Fripp. "We just look at each other and we know. Robert is a very, very close friend of mine. He spends more time at my house than he does at his house. Twenty-one years together, gee whiz. He's actually very fun -- more than you would think. But he's also a very serious musician, and brilliant. The main thing about Robert is, he has a different take on what you can do, so it pushes you to do things you wouldn't do on your own. I can make records where I'm in control, but it's healthy for me to also have some outside push. Crimson is always an interesting struggle. Not a bad struggle; an interesting one, where you feel like 'I'll get through this, and when I get to the other end, I'll feel better about it.'"