Set to Appear at Wizard World and Perform at the Agora, KISS' Gene Simmons Discusses His Love of Comic Books 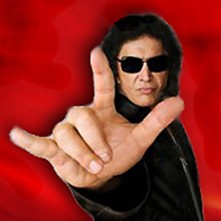 In their decidedly awkward exchange that aired more than ten years ago on the program Fresh Air, Simmons objected to her questions and dismissed her as someone who was “studious and reserved” while she maintained that he has simply adopted an “obnoxious” persona for the sake of the interview.

“I’m well-read myself and was a sixth grade teacher and I can bore you to death by reciting existential philosophers like Kierkegaard, Kant and Nietzsche but when smart folks use it as a battering ram and a holier-than-thou thing, the hairs of my back bristle,” he says of Gross during a recent phone interview from Vancouver, where he had been the keynote speaker at the YPO Conference.

“I don’t go for that stuff," he continues. "I would not stand for it. This woman at NPR started with, ‘Tell me about the KISS.’ I said, ‘Tell me about the NPR, which sounds like a communicable disease I hope I don’t catch.’ I thought, ‘Who the fuck are you?’ If she wants to quote psalm and verse about history, theology and anthropology and so on, I’ll go toe to toe. The best thing when you meet anyone is to cut out the self-importance thing. Treat everybody as you would like to be treated. Jews figured out that a long time ago with something called the Ten Commandments, which we gave to the rest of you guys.”

His rock ’n’ roll legacy dates back decades. Shortly after KISS formed in 1973, Simmons turned the hard rock band into a merchandising juggernaut that now includes an empire of cruises, golf courses and limousines. Simmons says the various KISS-related merch will “make your head spin.”

Early on, he says the group had to disprove naysayers who dismissed the costume-and-makeup wearing band as a gimmick.

“You have to ignore your critics,” he says. “They were hired without any degrees just to give their opinions. That’s fine. That’s all well and good as long as you say, ‘My opinion is that Led Zeppelin sucks.’ It’s okay as long as you give observational facts. Critic says, ‘Led Zeppelin sucks, but 50,000 people are going nuts, and they’ve sold 100 million albums, so I guess I’m the guy in the corner, and they need to send the w-ambulance.’ That would be fair, but that’s not the case. The pen is very mighty, and critics believe they’re more important than they are. If you really look at the criticism that Star Wars and all the biggest forms of entertainment got, you’d be shocked. Rolling Stone called Led Zeppelin’s first album ‘limp blimp.’ And they called R.E.M ‘America’s finest band.’ I give up. Here we are 43 years later and our merchandising outsells the Beatles and Elvis combined.”

The band just performed at the Superdome in New Orleans and starts a European tour on May 1. Simmons says he found Wizard World appealing because he has loved comics since a youth.

“I’m a comic book geek,” he says. “I was when I was a kid, and I am more so now. When I was a kid, people said you were stupid for reading that stuff. Now, it is the predominant pop culture format on earth. Logan just opened and it’s the biggest thing since sliced bread. Every Marvel movie that opens shakes the heavens. It’s a personal thrill for me because that’s the stuff I loved as a kid. I loved the Beatles and the Stones and comic books and that stuff is still popular. I was right, and the chicks were wrong. All our stupid boy stuff is the stuff that rules the planet. It is far to say the ‘boy stuff’ because I’ve never gone to see a Barbie movie, and I don’t care. If Avatar comes out, everybody goes. And when the Super Bowl comes on, everybody watches.”

Simmons says he takes an “open book” approach to the meet and greets with fans.

“That makes me some people’s most favorite person and some people’s most hated person,” he says. “Politicians until our president Trump would tell you whatever you wanted to hear just to make themselves popular, so you never got to know them. I personally don’t care. To thine own self be true. You can’t please everybody and not everyone likes Jesus anyway, even though he’s a Jewish rabbi. That’s not my problem; that’s theirs. We hold these small intimate parties open to a couple thousand people, and the Wizard World guys promised that tickets would be only 20 or 30 bucks. It’s cheaper to rock out with me than have lunch with your friends.”

For the show at the Agora, Simmons has hired a few session players to back him for a set that will feature songs from his solo albums, “obscure stuff” and KISS favorites.

“I’ve never done solo tours or anything like that because KISS satisfied me in all ways,” he says. “Every once in a while, I would jump up on stage with someone like Johnny Depp. I want to do something special for the fans. We just want to rock out and have a good time. I’ll play songs I’ve never played before.”

Simmons says the thought of retirement hasn't crossed his mind.

“I won’t have a say in that,” he says. “Mother Nature will have a say in that and try to stick me six feet underground. I’ll be kicking and screaming. I really enjoy life. It doesn’t take much to tickle me. Vacations don’t appeal to me. I don’t have ten cars. We have a nice big house, don’t get me wrong. When you think about it, the richest and poorest guys do the same things. When you go to sleep and have your eyes closed, you have no idea whether you live in a palace or a one-bedroom. Ultimately, the best thing in life is to have peace of mind and be comfortable in your own skin.”