A strong hour-long set had us wishing for more 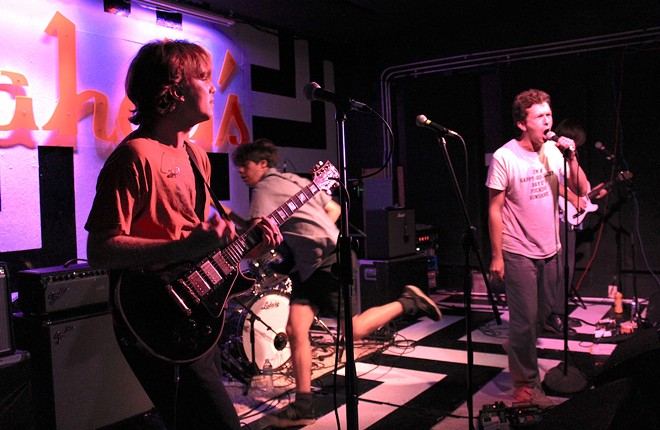 Shame comes off as a macho, but it didn’t take long during the band’s show in Lakewood Saturday night for them to give the crowd a wink.

During their set at Mahall’s, the noisy quintet thrashed away while lead singer Charlie Steen scowled and shouted away lyrics. But listen closer to what Steen is saying, and you hear lines like, “So in the past week I’ve made several trips to the gynecologist.”

Those juxtapositions, and just plain loud and fun music, proved that Shame belongs in the upper echelon of today’s touring acts.

Touring behind last year’s sophomore album Drunk Tank Pink, Saturday’s concert was the first time Shame swung through Northeast Ohio. The band is one of several European punk bands with a new sound and style - one that distills the joys and community of punk shows while eschewing much of the toxic masculinity that defined the scene for many years.

But Shame is more than just a punk band. Wearing a T-shirt (before taking it off) that said “I’m a happy-go-lucky ray of fucking sunshine,” Steen barked lyrics that he merely spoke on record. Adorning his voice were pummeling drums courtesy of Charlie Forbes and a twin-guitar assault by Sean Coyle-Smith and Eddie Green that had less to do with three-chord rock and more to do with atmospheric textures.

“Water in the Well” bore similarities to 1970s-era The Fall, and multiple songs showed the band's willingness to tinker with spoken-word pieces. Closer “Snow Day” had multiple parts that wouldn’t sound out of place on a concept album.

The highlights were numerous “6/1.” “Dust on Trial.” “Tasteless.” In fact, there was nary a weak moment throughout the hour-long set.

And while the band occasionally slowed it down, like with standout “Adderall,” their intensity never waned. Steen alternately clutched his mic stand for dear life and bounced around while bassist Josh Finerty ran back and forth onstage (making it off at least once).

And then there was Steen’s comically literal banter. He introduced “The Lick” by telling the crowd that, “This is another song for you and this. Is. How. It. Starts," ending with, “And that is how it. Fucking. Ends.”

It all added up to one of the best shows in the Cleveland area this year. One that made me want to believe the band when Steen said it would return. Or did he also say that with a wink?