The Voodoo Organist serves up the retro ambiance of a haunted roller rink. 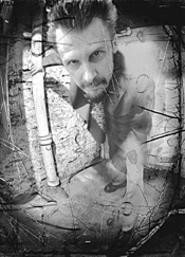 "I'd use 'em for roadies," the 31-year-old shlockmeister says, laughing. "That's for sure."

Wexton oughtta know how valuable the undead can be. Schlepping around a hundred-pound instrument night after night during a six-week cross-country tour certainly takes its toll on the body and spirit. But once everything is set up -- meaning that the skull maracas and theremin are within arms' reach, and the house lights are dimmed -- the Voodoo Organist casts an eerie spell upon listeners, hernias be damned.

"The organ I tour around with is a portable dual manual-combo organ from the '70s, a Yamaha YC-25," Wexton says. "I run it through a rotary speaker. Inside the speaker cabinet, there's a horn that actually spins around. Usually I leave it on the fastest setting, which is the most vibrato-rich."

In addition to Doppler-effect-inducing analog equipment, Wexton relies on digital gear for an impressive array of samples and tape loops -- including brass, xylophones, and steel drums.

"I'm not a one-man band in the sense that I play drums at the same time," he concedes. "I sample all my rhythm tracks in a number of different ways. I've got a few workstations and synthesizers. I've got a computer-based system and a drum machine from the '60s with programmed rhythms -- rumba, bossa nova, you know -- that sometimes I incorporate into the mix of the song. For the most part, the beats that I play are the ones I've made myself."

Voodoo Organist's self-recorded debut, Exotic Demonic Blues (self-released on Witch Doctor Records), reveals plenty of sonic hand jive, humor, and soul. It contains a rousing tent revival ("I'm Goin' Down"), a gothic waltz ("Spell"), a walking, bass-driven, nocturnal blues number ("Kabam!"), and even a psychedelic ode to being loaded and alone ("New Mexico"). From start to finish, Wexton's influences are as obvious as a shrunken head in a picnic basket.

"My holy trinity of rock really is Screamin' Jay Hawkins, Tom Waits, and Nick Cave," he says. "That's kind of an easy frame of reference for a lot of people. Screamin' Jay is like my god. His voice is absolutely phenomenal. He can sing, he can scream -- he can do it all. You get a song like 'Alligator Wine,' which is a real dirty, voodoo blues, evil-sounding kind of song, and, you know, the next one will be this crazy rendition of '(Take Me Back to My) Boots and Saddle.' He just jumps all over the place, musically speaking. That's one of the things that I really, really dig about him."

Perhaps equally destined for novelty status (the late Hawkins once claimed that he'd "rather sing opera than be a black Vincent Price"), Wexton nonetheless exudes charisma as a theatrical ghoul-rocker. Snazzily attired in a red-and-black suit, pounding an organ cluttered with Halloween totems ("I guess you could call it a shtick," he allows), Wexton answered voodoo's call after leaving his native Detroit in 1994 for a stint in Nashville with the noise-metal outfit Today Is the Day. After relocating to Los Angeles with the Screaming Demons (a punk act with two keyboard players that "fell apart, like most bands do"), the once-and-future carnival barker unveiled his alter ego in 2000, finally dependent on no one but himself to perform live.

"I really enjoy being a solo act," Wexton says. "As a one-man entity, the overhead's pretty low. I don't have to share the profits with anybody; it's just me. I do all the touring, all the driving, all the setup myself. I'm certainly not doing as good as I'd like to be, but it takes time to build up a following."

"I get kids from the all-ages set, all the way on up to Mom-and-Dad types," he says. "I typically get a real wide mix between male and female, hipsters, non-hipsters, punk rockers. A lot of people seem to dig it."

Touring full-time since he quit his day job in 2002, Wexton plans to write and record a second album this summer, using the same homegrown approach as before.

"I'm gonna try to avoid the big-label thing as much as I can," he says. "Take the Ani DiFranco route. I don't have distribution yet, so it's basically the kind of thing I sell online or at shows." (For a complete line of merchandise, go to www.voodooorganist.com.)

But until he can afford to hire a roadie or two, Wexton will have to keep on lugging that antique organ around himself. That is, until he learns the right incantation to use with human hair or toenail clippings.