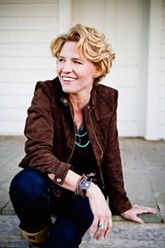 Courtesy of Michaela O'Brien PR
“The Queen,” one of the tracks on Catie Curtis’s latest album, 2014’s Flying Dream, speaks volumes about the perspective that Curtis has attained over the course of a career that stretches back some 20 years. “I felt better than I could have dreamed as the queen,” she croons over a jangly guitar riff and cooing backing vocals. The song recounts an incident that actually took place a few years ago.

“It was originally inspired by playing a show where Queen Latifah was supposed to receive an award but she didn’t show up,” says Curtis via phone from her Newton, Mass. home. “It was at one of the presidential balls. So I took up a two-hour slot. I realized I could take up that space. You’re not the same person when you’ve been doing something for 20 years.”

Cutis refers to Flying Dream as an album that reflects “an undercurrent of change that’s going to come and knowing more about yourself than you once did.”

During her career, Curtis has released 13 albums, performed at the White House several times, played two Presidential Inaugural Balls, toured with Lilith Fair and taken the stage at Carnegie Hall. She’s won multiple Boston Music Awards and also claimed the Grand Prize in the 2006 International Songwriting Competition. She placed first out of 15,000 entries. The New Yorker once caller her a “folk-rock goddess.”

Growing up in rural Maine, Curtis says she wanted to play music from an early age.

“I just grew up craving to get an instrument in my hands,” she says. “I grew up with a broken-down Sears’ guitar with only four strings on it. Trying to make that thing work made me want to get an actual tunable guitar with six strings. I was given one from a woman who was working at a yard sale.”

Initially, she struggled to write songs.

“I hadn’t grown up with folk music,” she says. “I had grown up with pop and Broadway musicals. I was a teenager. But I went to Brown and got exposed to Greg Brown and Nanci Griffith and more interesting stuff. There was space for people to play original work. I moved away from playing cover songs to writing. There was also a culture where writing your own songs was really supported and nurtured.”

She self-released the cassette-only Dandelion in 1989. At that time, it cost a bundle to make your own records. For an indie artist to release a record on his or her own dime was a considerable accomplishment.

“In the early ’90s when I made my first self-produced records, the budgets were 15 or 20,000 dollars,” she says. “You had to pay for analog recording studios and all that. When I was on major labels, they cost something like 100,000 dollars. And then you come back to your own label and you can make a record for 15 or 20,000 dollars again because of the digital technology. Now, you’re paying for the musicians, which is great. You’re not paying for a big studio. That part really blows me away, that the budgets have come back to where they were in the early ’90s. You can easily spend a $100,000 but it’s possible to make one for less.”

She cut her musical teeth on the Boston folk scene, which was particularly vibrant thanks to one particular club.

“[The Boston scene] is tied into the history of political folk music like Pete Seeger and people like Bonnie Raitt who used to play at Club 47,” Curtis explains. “A big part of it is non-traditional venues like Unitarian churches or a good community hall or a library which isn’t mainly for concerts. One of the things that Boston has going for it is its location in New England. You can drive 45 minutes and play a gig and you end up in Maine, New Hampshire, Connecticut and Vermont. When I lived in Ann Arbor, everything every gig was four hours away.”

For Flying Dream, Curtis partnered with former Sugarland singer Kristen Hall. Curtis says the end of her marriage influenced the songs to an extent.

“It was the last year of my marriage,” says Curtis. “I was married for 15 years. I wasn’t consciously aware of the fact that some of the songs were going to be alluding to that. It’s a common experience, but I think I was feeling that we might both make a leap of faith, my ex and I, in making a decision. I also wrote it about meeting my daughter’s birth parents in Guatemala. That was a very surreal experience. I kept thinking, ‘Don’t let this be a dream.’ I really wanted it to be true. As I look back over the material, a lot of it is being able to have a vision of where you need to be.”

And yet songs such as the lilting “Live Life Love” have an exuberance to them.

“It’s definitely not a breakup record,” Curtis explains. “It was all written while I was still married. To me, and maybe it doesn’t read this way to other people, but I see myself looking for ways to take risks and to be on my own. I love that feel of ‘Live Life Love.’ There’s a banjo on it that reminds of [the Muppets' tune] ‘The Rainbow Connection.’ It’s playful and light. The theme fits in because it’s about how we’re going to take this empty cup and fill it up. It’s just about looking for ways to thrive.”

Curtis is due for a new album and says she’s written more than enough songs for the next offering.

“They’re all over the map thematically, but I’m on the verge of booking the studio time to record,” she says, adding that some new tracks will likely make their way into the set she plays at Woodshed Lesson Studio in Oberlin.

When we tell Curtis that we’re impressed by the fact that she’s coming to Northeast Ohio in the dead winter, she says that she enjoys visiting the Midwest in winter because of the way fans show their appreciation.

“Things slow down for me over the holidays, so I like to come out of the gate fast and get back in the swing of touring,” she says. “I think people prefer to come out during the winter as opposed to the summer, especially in places where it gets cold in the winter. They like to come to a warm setting. I think it’s a great time.”