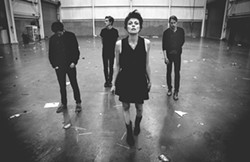 Emily B. Hall
Akron-born, Nashville-based singer-songwriter Kate Tucker has had a busy summer. She released “Let Me Go,” a short film that Adam Smalley directed for her Shape Color Feel project, and she also issued a new music video for "Let Me Go," a moody song that features hushed vocals and a gentle piano melody (think Julee Cruise, the singer-songwriter who works with filmmaker David Lynch on occasion). On Thursday night at Musica in Akron, Tucker will debut a set of new songs before heading into a studio in Bloomington to start to record her next album. While Tucker usually plays with her backing band Sons of Sweden, this will be a solo performance.

“I’m going into the studio next week to record some of the new record,” she says. “I thought it would be cool to try out some of the songs before an audience of people who know me. It’s good to throw the songs out there and see how they land. I think it’s important to get a song down to its bare bones and see how it emotes. I have played a few solo shows in August, but I haven’t played most of these songs before an audience yet.”

“I’m ready to do something new,” she says. “It’s going to be in the opposite direction of letting other people control the final product. The new album will also be a musical departure. I love what we have done so far but I want to do something different.”