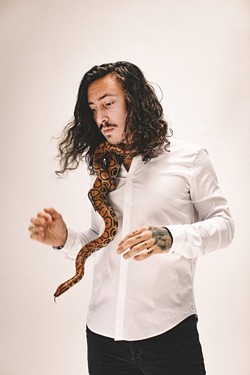 Gundersen, however, says he “doesn’t connect” with the albums he’s made in the past and doesn't seem to want to discuss anything that's come before his latest effort, White Noise.

“It was so long ago,” he says in a recent phone interview as he drives through Montana to a tour stop when asked about Brand New World. Gundersen performs with his sister, Elizabeth Gundersen, at 8 p.m. on Friday, Feb. 2, at the Beachland Ballroom. “I had done some recording before then. My dad had an old 8-track that he taught me how to use. I made a record on that when I was 14.”

Gundersen says he takes inspiration from dancer and choreographer Martha Graham, who famously once said, “no artist is pleased. There is no satisfaction whatever at any time. There is only a queer, divine dissatisfaction; a blessed unrest that keeps us marching and makes us more alive than the others.”

“I’ve taken that on as a mantra,” says Gundersen as he quotes Graham. “I accept my own dissatisfaction, and I use it as fuel for the fire.”

Gundersen, who grew up in a religious family, taught himself to play guitar at an early age. He says it was the only hobby he had and that he spent “a lot of time” in his room writing songs.

Having spent his youth listening to artists known more for their songwriting than their singing — guys like Neil Young, Bob Dylan and Tom Waits — Gundersen went through a “deep Jeff Buckley phase.”

With White Noise, he sent out to expand his sound and experiment. Album opener, "After All (Everything All the Time)" features soft vocals and an elegant string arrangement courtesy of his sister Abby.

He recorded the album at the Ballard Baitshop in Seattle, a place that used to be a sail warehouse in the ’40s. He spent about eight months there and then finished the album at other studios around Seattle.

One of the album’s many highlights, “Number One Hit of the Summer (Fade Out)” benefits from soft-to-loud guitars and pounding drums. On it, Gundersen ominously sings, "Deer in the headlights, frozen in the street/Head above the water, still swimmin’ up stream."

“I think a few things inspired it,” says Gundersen when asked about the track. “It’s a cultural critique essentially. Watching the election cycle was an anxiety-ridden time. Things were changing and heading in a strange unsettling direction. We couldn’t stop watching it happen. It’s about that.”

A music industry party he attended became the subject of the Radiohead-like “Cocaine, Sex & Alcohol (From a Basement in Los Angeles),” and "Fear & Loathing," another album highlight, has a classic folk vibe to it.

White Noise represents a huge step forward for Gundersen and prompts a question about where Gundersen thinks he'll take things next.

“I think creatively I hope to be changing and evolving,” he says. “This record hopefully broke some perceptions of what I did and who I am as an artist so that going forward I can do whatever I want. I can go in any direction. I’m not sure what direction that will be. I will do a lot of writing over the summer. I’m always just looking for a more honest expression of myself, which is what music has always been. It’s about chasing after that. Music is always about trying to find that perfect form of expression.”