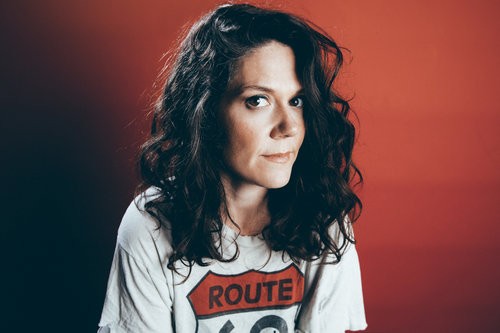 Joshua Black Wilkins
Both have terrific albums to promote. Produced by Mike Mogis (Bright Eyes, First Aid Kit), Earle’s Kids in the Street represents the first time in his decade-long recording career that Earle has worked with an outside producer. The result is an eclectic album that shows off his literary-minded lyrical abilities.

Hiatt, who has toured with alt-country acts such as Drive-By Truckers and Old 97s, comes to town in support of last year's Trinity Lane, an album that shows off her songwriting chops and supple voice.

In separate interviews (Earle spoke via phone from a Fort Collins tour stop, and Hiatt responded via email), the two discuss the tour and their respective releases.

Talk about how the two of you know one another.
Earle: We actually don’t know each other, but I know her father pretty well. We’re label mates. I love her record, and I’m in the position now where I can pick and choose my openers. She opened for my dad, who was really impressed with her. It was an easy decision for me.
Hiatt: I was asked to join Justin for some shows and immediately said yes. I am a fan and thought it would be a cool combo.

How do you think your sets will complement each other?
Earle: I have no idea. I haven’t seen her play yet. One thing that she does is she has a good sense of the humanity in her writing. She’s also just a good songwriter. I know that my fans are songwriter friendly. They’re actually songwriter adamant. So many times, you get somebody out there who can’t write their way out of a wet paper sack. That can be a problem for people, especially for me because I don’t want to listen to that night after night.
Hiatt: Well, just a couple of guitars and our songs. That’s a fun way to share a night, bare bones. Love, self-deprecation, family with a twist of humor...those all seem to pop up in our tunes. It’ll be a cool time, and I hope I learn a lot. I love watching other songwriters at work.

What kind of music did you listen to while growing up?
Earle: My mom was all over the place. She liked rock ’n’ roll. She actually liked Metallica quite a bit. She loved the Replacements and the Pretenders and things like that. With the Pretenders, the sense of timing and melody was important. I’m inner-city white trash, so there was a lot of hip-hop involved. That gave me this sense of rhythm and lyrical timing, not that it’s blatantly obvious, but it’s something I think it played a role.
Hiatt: I listened to everything, but lots of rock 'n' roll. Weezer made me want to play guitar and write songs. And it was Wynonna Judd and Mariah Carey album that I learned to sing from. On my sixth birthday, these twins gave me a cassette of each, and it was on.

What role did your father play in helping you develop as a songwriter?
Earle: He showed me where the music I loved that was current came from. He made a big impression on me about how to be a writer. You have to read because if you don’t put anything in, nothing good comes out. Literary sources can be just as big an inspiration for your music as anything. Listen to Guy Clark’s “Let Him Roll,” and you can’t tell me that Jack Kerouac didn’t have a hand in that song.
Hiatt: Just watching him create over the years was immensely inspiring. Also shooting straight with me — he doesn’t just dish out the compliments for nothing. And I appreciate that.

What did he teach you about the music business?
Earle: I did some touring with him as a tech, and he taught me about the road. A lot of people who get started off have this total misconception about what happens out here on the road. It’s not a hyper-glamourous thing at all. It’s work. It’s serious work. It’s the same thing with writing. Maybe there have been a few in history who could write immediately, but you’re probably going to have to write a bunch of bad songs before you’re able to write good ones.
Hiatt: Put the music first.

The songs on your new album are really well-crafted. Talk about when they began to come together.
Earle: I was living in Northern California about 30 or 40 minutes north of Fort Bragg in a tiny little village of about 15 people. It’s strange that it came to this, but when I wrote the records before, I was living in New York or Nashville. There was a big social part of my life then. For some reason, my songs were more introverted at that point. When I got to a place where I didn’t socialize so much, I started to look more outward at the people I grew up with and see them as something special rather than something routine. A song like “15-25” is based on me. That’s the thing. I’m lucky that I survived. I remember when I turned 30, I saw my mother and jokingly said, “Did you ever think you’d see this day?” She said, “No.” In all seriousness, she was not joking at all. She was sad. I don’t think there was anybody who knew me in my teens or early twenties that thought I would live for very long.
Hiatt: Thanks! They came together the summer after I moved to my little place [in Nashville]. I spent pretty much every night alone and wrote to cheer myself up. That’s what I usually do. So far, a lot of my songs have been fairly true to my life. I’m actually just now realizing I can say anything I want, even if it didn’t happen! Haha. There are a few [songs] that are dreamed up though.

Were you going for something particular in terms of your approach to the music?
Earle: I’ve always loved to dabble in ragtime and soul and country. I got away from that after Harlem River Blues. I ended up in this place where there was nothing going on and went back to the music I loved. If I’m listening to music at home, I’m most likely listening to Billie Holiday or Count Basie or Son House. At the same time, I’ll throw on the Replacements. It was just me going back to that thing of paying homage to the people who inspired me to be a musician in the first place.
Hiatt: Not really. I just want to let it rip. I don’t like being boxed into anything, and as soon as I feel that way, I tend to push out.

I think you’re playing an acoustic set. Talk about the challenges that come with that.
Earle: Playing solo presents no challenge to me whatsoever. It’s what I’ve done for 90 percent of my career. That was something my father taught me. He told me, “Learn to play a real solo show, so you can have a career even if you’re just playing coffee shops.” The real challenge is playing with a band. When I do solo shows, it’s all completely on me.
Hiatt: It’s a different take on where the songs landed, but it’s actually where they all start, so it’s not too tough. I’m pretty happy when it’s just me and my guitar.