Six Concerts to Catch in Cleveland This Christmas Weekend 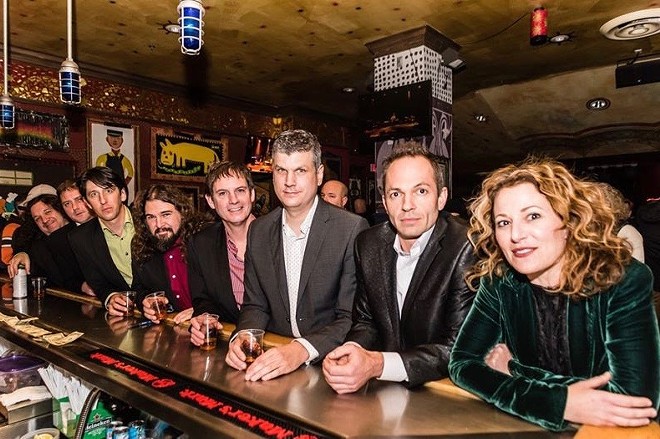 Courtesy of the Boys From the County Hell

Straight No Chaser: The 25th Anniversary Celebration
Straight No Chaser, a musical group that features the "sound of nine unadulterated human voices coming together to make extraordinary music that is moving people in a fundamental sense," as it's put in a press release, has two RIAA Gold Certified albums, more than 1.5 million concert tickets sold, more than one billion streams on Pandora, and more than one million albums sold worldwide. The male a cappella group's concert begins at 7:30 tonight at the Akron Civic Theatre as part of a 25th anniversary celebration tour.
182 South Main St., Akron, 330-253-2488, akroncivic.com.

The Boys From the County Hell
When local rockers the Boys From the County Hell first got together in the late '90s as a Pogues cover band, they were just supposed to play once and call it a day. But after selling out their first show at the now-shuttered Euclid Tavern, the group's popularity escalated, and it’s been going strong ever since. The group has performed in Las Vegas and in Thailand. The group plays its annual holiday show tonight at 7 at House of Blues.
308 Euclid Ave., 216-523-2583, houseofblues.com.

Signals Midwest
The indie rock act with Cleveland roots put out a punk-leaning new album this summer and has lined up a slew of dates for 2023. It closes out the year with this show that takes place tonight at 7:30 at the Grog Shop. The Grievance Club, Low Morale, Hunden and RRRIOT!!! share the bill, and the concert serves as a benefit show for the Greater Cleveland Food Bank.
2785 Euclid Heights Blvd., Cleveland Heights, 216-321-5588, grogshop.gs.

Unknownphrazes
It's a Grog Shop tradition to host a concert on Christmas Day, so it shouldn't be a surprise that the Cleveland Heights will not only be open but will feature a concert. Tonight’s show includes an appearance by Unknownphrazes, a Cleveland rapper who has opened for acts such as Dom Kennedy, Vince Staples, Curren$y and Ab-Soul. The concert starts at 9 p.m., and tickets cost $10 in advance, $15 day of show.
2785 Euclid Heights Blvd., Cleveland Heights, 216-321-5588, grogshop.gs.

Carlos Jones & The P.L.U.S. Band Holiday Revival
First in I-Tal and then in First Light, local singer-songwriter Carlos Jones has been at the forefront of the local reggae scene for more than 25 years. The popular local reggae singer brings his annual holiday show to Music Box Supper Club tonight at 8.
1148 Main Ave., 216-242-1250, musicboxcle.com.