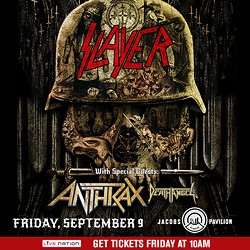 Speed metal veterans Slayer and Anthrax have just announced that they’ll team up with Death Angel for an extensive North American tour that launches on Sept. 9 at Jacobs Pavilion at Nautica.

"We are thrilled and honored to be part of this amazing North American touring package," says Death Angel singer Mark Osegueda in a press release. "It just looks, sounds and feels right. This will be Death Angel's first-ever tour with Slayer, something we've hungered for our entire career. And we will bring that hunger to the stage every night, so get there early because this will be a show not to be missed; from the first note of the night until the very last! Metal is alive, hungry, thriving, and coming for you!"

"It’s always super fun for us to tour with Anthrax,” adds Slayer guitarist Kerry King. “[Bassist] Frank [Bello] is one of my best friends in the biz!! Put that together with Death Angel, and fans will probably see the best package this year. See you there!”

Slayer's founding member, guitarist Jeff Hanneman, passed in 2013, and Exodus guitarist Gary Holt has filled in for him since. Paul Bostaph, who was Slayer's drummer from 1994 to 2001, has rejoined bassist/vocalist Tom Araya and King.

The Slayer Fan Club Presale starts tomorrow and the general on-sale begins at 10 a.m. on Friday. For all ticket purchasing and VIP packages details, log onto http://slatanicwehrmacht.com.