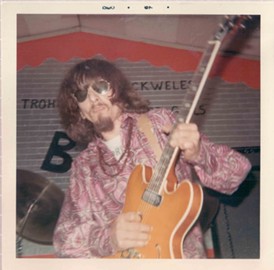 Now, Smog Veil Records presents a new release from the band’s archives. The latest offering in label’s Cleveland-centric reissue campaign, Platters du Cuyahoga, The Schwartz Fox Blues Crusade: Sunday Morning Revival, will be available on CD, vinyl LP or digitally. All formats will include extensive liner notes and vintage photos. Both the recordings and visual materials have never before been released. The album comes out on Nov. 18.

“You might be stretching to call it a band,” says Fox when asked about the project. “It was a moment. I had had in my mind that it would be fun to make a blues record and nothing more than that. We had no money, of course, in those days. It was early 1967.”

Fox says he had done most of his other recordings with local producer Ken Hamann. But because he was on such a tight budget, he says he was “embarrassed” to approach Hamann. So he and his bandmates found a studio that they could use on any given Sunday and cut the sessions that would become Sunday Morning Revival. The album commences with the heavy blues of “Ninety Nine,” a song that includes an extensive piano solo and some gritty guitar work. It also features covers of tunes by acts such as Big Joe Williams and Willie Dixon.

“We were really formative at that point,” says Fox. “We were dragging Glenn [Schwartz] into British blues, and he was dragging us into more authentic blues.”

“We convened at an obscene hour on a Sunday and four or five hours later, we had a rough mix and we were done,” he says. “We went in there with no song list. It was all done on the spot. My inclination is that there wasn’t an overdub. What you hear is probably exactly what was played. If authenticity and spontaneity counts for something, then this is legit. That day we just stood in a circle and shouted out tunes. That’s exactly how it came about.”

Because Fox was wrapped up with the James Gang, which would soon become a national act, he didn’t pursue the Schwartz Fox Blues Crusade. The group didn’t record another session.

“When we left that day, I’m not sure I had the confidence in what we accomplished,” he says. “I thought it was nice, but I didn’t know who would want it. I wasn’t sure I saw a place for it. I don’t even know who I would have taken it to. The major labels weren’t releasing blues in 1967. Elektra Records had the Butterfield Blues Band, but they weren’t a major label at the time.”

Fox says he’s surprised the band sounds as good as it does on the reissued album.

“It’s better than I remembered it,” he says. “We played like a bunch of kids that age. There’s my negative. We were what we were. Everyone was overplaying. No one understood the value of space. If there was a hole, six guys jumped in it every time. I know this with a couple of years of experience. I didn’t know it at the time."

He's also particularly proud of the level of musicianship.

"Other than the overplaying, there are some qualified players," he says. "Bill was as good as anybody. Glenn was setting standards back then. There weren’t many American kids playing then who had mastered the sustain. He was listening to Sonny Boy Williamson and Howlin’ Wolf. To be fair and honest about it, we were listening to the British guys who had listened to those guys. It took us a few years to go back to the sources, and I thank Glenn for that. He was very meticulous about making sure we knew where the stuff comes from.”