"Lust Crime and Holiness" (At a Loss Recordings) 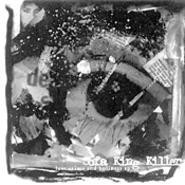 With stoner metal, monotony is as much a part of the proceedings as heavy eyelids and Cheetos. But the genre gets enlivened on the new four-song EP from Akron's Sofa King Killer, which peppers its sound with a taste of acoustic blues and melodic riff rock.

The opener, "Die Like an Astronaut," sticks true to the sludgecore form: all oppressive, funereal guitars, with frontman Ryan Burgy growling like Clutch's Neil Fallon on a diet of unfiltered cigarettes. But then the instrumental "Blues Couch" breaks rank with emotive slide guitar and doleful organ, and "CLE" distinguishes itself with sweeping, Dickey Betts-style soloing, before the album ends with another sampling of black doom in the form of "Burn the Fields." Get this disc and feel the heat.