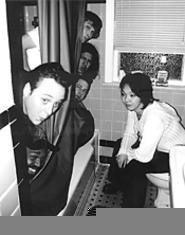 Walter Novak
Potty hard: Finless Brown knows how to have a good time.

"It seems like there's enough people here to bridge any gap," says drummer Akwaman, glancing about the room at his bandmates, whose musical tastes -- and skin tones -- stand in sharp contrast to one another. Before him sits a Lilliputian Japanese singer with a background in pop, a Venezuelian guitar player with a taste for Duane Allman, and an African American MC reciting rhymes written on a flattened Labatt's box.

"See how much we drink beer," rapper Paulie Rhyme says, waving the smashed cardboard in the air like a drunk swatting at flies. "It's all about having fun; it's about building the scene. It's just like the Roots in Philly, you know what I mean?"

If we don't fully understand at first, we begin to, once they pick up their instruments. As bassist Scott Huge begins to pluck out rhythms as pronounced as his surname, Rhyme heats up the mic, and a DJ, Insight, starts scratching wax as if it's a mosquito bite. Asian chanteuse Moto comes in on the choruses like Deee-Lite's Lady Miss Kier with a Far Eastern accent, keyboardist Jason Drexler and guitarist Paco add texture with swirls of reverb and fuzz, and Akwaman keeps everything grounded in beats that hit like Julius Peppers. The result is a spiky mix of Japanese soul and live hip-hop that has no immediate counterparts. This becomes especially true when Moto starts dropping rhymes in her native tongue. Indeed, as the band traverses a variety of musical styles with the flick of a wrist, the only thing that seems to be broader than these folks' repertoire is their smiles.

"Sometimes I overdo it onstage, because I'm just so happy. Every time we play, I'm screaming and yelling and shit -- I'm just having a blast," says Rhyme. "Back in the '60s, '70s, and '80s, people danced. You go to a club now, and people are just standing there, but we're up there acting crazy. You gotta make people have fun."

This bunch certainly leads by example. During practice, they gather around a PC to watch, amid rising guffaws, a video of a portly woman crashing spectacularly on a bicycle. They keep chuckling as they reflect on their motto: "Finless Brown: Number twoing on crews." Such modesty quickly dissipates, however, once heads begin to nod, and the group lays down a steady groove that leads into the bristling "Rap Politics." Though this lineup has been together only six months, already they've raised a lot of eyebrows -- largely as a result of Moto's unique flow.

"I try not to use so much English, because in Japan, a lot of the rap lyrics are so mixed up with the English language that they don't even know exactly what it means. They just use it because it sounds cool," Moto explains. "So I'm trying to go against that and see if I can describe how I feel using only my own language, and see if people can feel that."

Feeling Moto's words is easy and intuitive -- her rhymes are as arresting as a heart attack. Comprehending them, however, is another story.

"I can't understand it, but I know it's tight," Insight laughs.

"That's the best thing: People will be like 'Man, I don't know what she's saying, but she is on beat, and it sounds good,'" adds Rhyme. "She gets better responses rapping in Japanese than most of the people in Cleveland get rapping in English. It's in her. She's an MC."

Albeit a converted one. Before September, Moto had never rhymed at all. Having come to this country a few years back to continue her education at Baldwin-Wallace College (and now at Tri-C), Moto was pursuing a career as a singer when she met up with Rhyme.

"I was doing like super-pop music. My producer even got me a choreographer to sing and dance, and that's what threw me off -- like 'This is not what I want to do,'" Moto recalls. "I got into a huge fight with her, and then I left. Paul thought that I should keep singing, so he started making beats for me and giving me opportunities to do backup singing for his groups. Last September we realized, 'Let's start helping ourselves instead of helping somebody else.'"

The duo hooked up with Akwaman and Huge, who were already performing under the Finless Brown moniker but were having trouble maintaining a steady lineup. Once the rest of the crew was recruited, the band quickly landed a regular gig every other Sunday at Felt in Cleveland Heights, where it hosts an open-mic night. They're set to drop their debut EP next month, and if it can capture any measure of Finless Brown's electric eccentricity, it could go a long way toward breaking the promising troupe.

"She's marketing a turd, and she doesn't even know it," Akwaman quips, to more laughs. His rejoinder is perfectly apropos, as the bottom line with this band is that fun is foremost.

"People make the shit hard," says Rhyme. "It's simple: Get with some people that you can hang out with and make good music. We don't think about the shit, we just do it. We just make music."