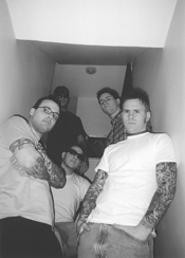 Run Devil Run: Krishna philosophies with crunch.
Sitting in his living room wearing nothing but a pair of gym shorts, Run Devil Run singer Don Foose looks like a guy who sings in a hardcore band -- he's skinny, his hair is shaved close to his head, and he's got tattoos running up and down his arms. But the Hare Krishna chants playing in the background and the small, closed-off meditation room suggest Foose, who wakes up at 4 every morning to chant for two hours, has other priorities as well.

"I'm not a preacher," he says. "I'm more about letting people know that there is an alternative lifestyle that you can take to and still be happy. I'm happy being free of intoxicants and not ingesting meat. There's more to life than just eating, sleeping, and having sex. I try to use my intelligence for other things."

Foose, who was born and raised in Cleveland, initially joined the airborne division of the army after graduating from high school and was stationed in Panama. Back then, he had a different viewpoint. "I thought I was a tough guy, and I wanted to learn how to kill and jump out of airplanes," he says. "I had an animalistic mindset."

Foose played in several bands before forming the Spudmonsters. When the Spudmonsters were on tour with the Cro-Mags in 1993, Cro-Mags singer John "Bloodclot" Joseph introduced Foose to Krishna philosophies, and he hasn't been the same since -- even his dog has converted to a vegetarian lifestyle.

"I saw this guy who was tattooed from head to toe, and he was an intimidating-looking person," Foose recalls of meeting Joseph. "I sat down to talk with him, and he discussed the philosophy of Krishna consciousness, and I was blown away by the fact that it wasn't so much a religion as it was a way of life. He made everything seem so simple and so logical that I couldn't help but take to it in my own personal way. I always pictured the Krishna as these little bald guys in orange robes, handing out flowers at the airport, and that's everybody's misconception of them, because of that movie Airplane! John took me to the temple in New York City, and [the Krishnas] were just happy. They were happy because they weren't connected to the material world. They were in this world, but they weren't really part of it. They were going out and spreading a positive message to everybody. I don't eat meat, fish, or eggs, I don't gamble, I don't take intoxicants, and I don't have illicit sex outside of marriage."

After years of touring Europe, the Spudmonsters became so well known that, when Foose formed Run Devil Run, which also includes guitarist Kevin Roberts, guitarist Nate Black, bassist Jay Belahovic, and drummer Richie Ferjanic, he was immediately signed by the Belgium label I Scream, which has distribution throughout Europe. Last year, I Scream released Run Devil Run's second record, Sinking Deeper, and on July 11 the album will be issued domestically through Victory Records, the Chicago imprint that has extensive distribution throughout North America and is home to many straight-edge punk rock bands.

"I think it's cool that each band on Victory has a positive belief behind what they do," Foose says. "They let all the bands express themselves. I'm a Krishna devotee, so basically the songs that I write are about the struggles in life and the positive ways I have fought through those hard times. Hopefully, the kids today will read these lyrics, and I can help them get through the problems in a positive way. You see so many bands that don't have a message or anything positive about themselves, and I want my lyrics to be worthwhile. I don't want it to just be a song or something to sing. I want them to have some meaning behind them."

On Sinking Deeper, which was recorded at Spider Studios in Strongsville, Run Devil Run evokes the spirit of bands such as Minor Threat and Sick of It All while making references to Foose's religious beliefs in songs such as "Rise Above," "Blood Runs Thick," and "Temple of Jiva." The band has spent the last eight months touring throughout Europe and playing at festivals such as the Dynamo Open Air Festival in Eindhoven, Holland, where Metallica headlined and over 80,000 fans attended over the course of three days.

"I think, over there, the kids are really hungry for the music," Foose explains. "The same applies here in the States, but there's usually two or three shows every week, and kids can pick and choose what they're going to go to. When you play over in Belgium, there might be one hardcore show every month or two months. It's a big event."