Saturday, June 17, in the Basement at Fort Liberty

Spare Change 00 in the Basement at Fort Liberty in Uniontown 7 p.m., June 17 with the Scrubs, Dysfunctional Ray, and 48 $5. [email protected] 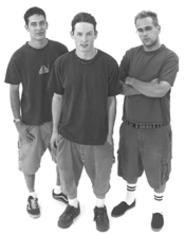 Spare Change: They book their own damn tours.
This summer, Spare Change 00 will be touring in support of its first CD with national distribution (. . . At First Sight, out on Grilled Cheese/Cargo Records, the label famous for introducing Blink 182), but the Canton trio already has accumulated the kind of war stories that it takes most bands a lifetime to gather. Whether it's trying to find beer for 15-year-old girls in New Jersey or getting stranded in the middle of downtown Minneapolis after their van broke down, the members of Spare Change 00, who are between the ages of 19 and 21, sound like seasoned veterans as they talk about their numerous tours, all of which they've booked themselves.

Sitting in the basement/rehearsal space of singer-guitarist Ryan Watts's parents' suburban home, which is located on a quiet street in Canton, the band -- which, in addition to Watts, includes singer-bassist Don Sedlock and singer-drummer Brian Knotts -- sounds enthusiastic about the prospects of touring with the support of a record label. Despite its youth, Spare Change 00 has taken itself to some 38 states (by the band's estimation) over the course of its existence.

An early show at Peabody's helped it get over its initial jitters. "The only time I've ever been nervous about playing live was when we opened for Goldfinger at Peabody's in 1997," says Knotts, who, along with Watts, has a day job at a restaurant in Canton. "The place was packed with 16-year-old kids. It was like our dream at the time -- to open for Goldfinger. People loved us, and I got over that fear. After that we played with bands like Unwritten Law and Showoff. We've made friends with a lot of those bands."

From constant touring, the band has made so many friends that, when it plays out of state, it often performs at small house parties and has teams of fans who pass out fliers in advance of its shows.

"It's been our dream and goal [to be a successful band] ever since we were old enough to have dreams and goals," says Sedlock, who's the assistant manager at a bike store in Canton. "We've been really good friends since we were kids, and we were all interested in music at the same time. We've had the same state of mind."

Watts and Sedlock originally played in two bands (Orange Juice With an Attitude and Real) before forming Spare Change 00 in 1996 with Knotts, who had recently returned to Canton after briefly living in Florida. In its early days, Spare Change 00 would hold all-ages shows at the local YMCA and attract young fans from both Akron and Canton. In 1997, the group released its debut, Give to the Poor, on Ohio-based Firebrand Records and last year followed it up with the self-released Has Sincerity Gone Out of Style? For . . . At First Sight, which was produced by Cal Moore at Immortal Productions Studios in Canal Fulton, the group spent more time in the studio and concentrated on writing better material.

"I think we're maturing a lot," Knotts says. "And it helps that we all have different kinds of music we like. I listen to a lot of underground stuff, like hardcore and emo, and that influences my drumming. But Ryan likes country, and it's weird how it all comes together."

While you'd be hard-pressed to detect the country influence on . . . At First Sight, the band slows the tempo down for the ballad "Take Me Away," but for the most part sticks to playing fast-paced, punk-inspired material.

"I wrote ["Take Me Away"] at a time in my life when I was falling in love," Watts admits. "And I wrote it in the van and sang Brian to sleep one night with that song. A lot of the songs were conceived when I was falling out of love, too. I had dated this girl for four years, and we broke up, and that caused a lot of commotion."

Playing mostly in Canton, Spare Change 00, which will play on the Cleveland date of the Warped Tour (July 13, at Nautica), doesn't regularly play in Cleveland, in part because it's not sure how to connect with the punk audience, if there is one.