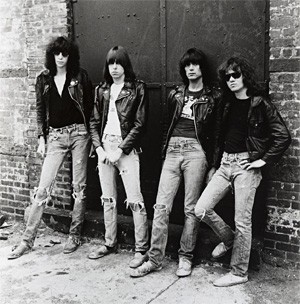 One of these guys had a huge schlong. The others liked sniffing glue.

Admit it: There are times you're sitting around, listening to your old Sex Pistols records and thinking, I wonder which punk-rock icon has the biggest schlong? Or maybe you're wondering: What kind of pizza would that one Food Network guy say goes well with the New York Dolls?

The Official Punk Rock Book of Lists answers those questions — apparently, Dee Dee Ramone had an enormous unit, and Mario Batali says a slice of thin-crusted Napolitana is a good choice — and more, running down everything from "6 Great Moments in Puking" to "12 Dudes Who Wore Dresses Onstage."

Modeled after the hugely successful Book of Lists series, The Official Punk Rock Book of Lists sticks a safety pin into the mix and spices it up with tales of sex, drugs, and rock and roll (not that the original Book of Lists, published in 1977, shied away from these subjects; we spent hours rereading the "Famous People Who Died During Sex" chapter).

Amy Wallace — who co-authored several books in the original series with her dad, novelist Irving Wallace — came up with the idea for a punk version. But she needed someone with a little more street cred and punk connections. Enter Handsome Dick Manitoba — frontman for '70s hell-raisers the Dictators, occasional MC5 singer, erstwhile junkie, radio host, and New York City bar owner.

The collaboration was tricky. Manitoba never met Wallace in person. But they spent hours e-mailing and talking on the phone. Manitoba's job was to reach out to his old pals, who put together the 125-plus lists that make up the book. Wallace whipped the scrawled lists into readable shape. "I made pitches to people, sold the idea to get them involved, and wrote a couple of the lists myself," he says. "Amy did all the grunt work."

Manitoba says he and Wallace had a blast coming up with the book's various lists — which span the mundane ("Raising the Bar: 90 Very Tall Punks") to the informative ("Richard Meltzer's Beatnik Roots of Punk: A Reading List") to spit-gobbingly punk ("4 Punks Who Had Sex Onstage"). Manitoba's favorite — "Debbie Harry's List of 'People I'd Like to Fuck'" — almost didn't happen. "I was at the 11th hour of the book, and I told her that I really wanted her to do some sort of list," he recalls. "But there's only so much you can push.

"I woke up one morning, wiped the crust out of my eyes, and was waiting for the coffee to get ready. I opened my e-mail, and there it was. My heart started pounding. I gave her a choice: movies, TV, food. And on her own, she sent me a list of 'Who I'd Like to Fuck.' On one hand, I was overwhelmed with joy. On the other hand, I was disappointed, because I couldn't find my name on the list."

Several people Manitoba reached out to didn't want to be included in the book, including a few who were less than courteous about it. Manitoba won't name names, but he still bristles at some of the responses he received. "You're allowed to say 'no'; I'm a grown-up," he says. "But one jerk responded to my well-thought-out, personal, respectful e-mail with nothing but 'not interested.' I don't even acknowledge this idiot anymore."

It's the old punk in him surfacing. Manitoba's been a fixture of the scene since 1975, when the Dictators released their debut album, The Dictators Go Girl Crazy! Bronx boys to the core, the Dictators are widely credited as the first New York punk band to make a record. Although they look like cowbell-lovin' cock-rockers in photos from the era, the Dictators indeed played a mix of mile-a-minute heavy metal and blurry riff rock that served as a template for the burgeoning punk-rock set.

They never really made it, but the Dictators were clearly an influence on another group of native New Yorkers: the Ramones — a band that's thoroughly represented in Manitoba's book. "We didn't have any sort of mathematical equation of what we were looking for," he says. "We just wanted punk rock."

And except for a few mentions — in chapters like "101 Ridiculous Punk Rock Names," "Gobbing's Greatest Hits," "10 Punk Songs That Are Nowhere Near as Offensive as They Seem" — Manitoba and the Dictators take up very little space in the book. Odd, considering Manitoba's knack for self-promotion. "I didn't want to overdo it," he shrugs. "You got some pictures of me in there."

Maybe Manitoba will make more room for himself in the sequel, which he's now plotting. After all, he says, people love this sort of book. He sums up the appeal with a reference that includes, in true punk-rock fashion, feces. "It belongs in the bathroom," he says. "There's only so many Victoria's Secret negligees you can look at when you're taking a shit. This gives you a little something more to do for five minutes."