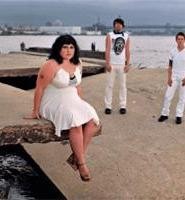 Jagged concrete is nothing new for Gossip's Beth Ditto (left).
Nothing official has been said, but it looks as if Le Tigre has bid the world adieu. It's even more definite that Sleater-Kinney has played its last shows for the foreseeable future. So who exactly is reppin' Riot Grrrl aboveground, out loud and proud? Rumor is, it's Gossip.

While some young female bands mimic '80s sounds, they've also adopted that era's shortsighted cultural attitude toward things feminist, seeing "grrrl" as the new F-word. Of course, maybe it is time to depoliticize the rhyme. Women don't have to deal with having their asses grabbed at shows anymore, female performers aren't jeered at to show some nipple, and artists like Pink are guiding young girls to critically analyze the patriarchal world around them.

Gossip drummer Hannah Blilie isn't buying it. "There's still this atmosphere of misogyny, and the music industry is still completely male-dominated," she says, when we find her with singer Beth Ditto days before beginning the band's Skunk's Not Dead tour.

Whether Gossip is poised to address these pervasive problems or even to keep the remnants of Riot Grrrl intact remains to be seen. Maybe humility causes her to shy from the issue, but Blilie readily concedes "That's a big cross to bear." The suggestion of replacing two titans of feminist music is a bit much. But with the band's sonic synergy and roof-rattling powerhouse vocals, it won't remain that way for long.

For now, Blilie remains focused and modest. "I am hoping that we can stay together, do our thing, and keep positive for people who need that energy in their lives," she says. A moment later, she adds more confidently that she imagines Gossip "can be that badass feminist band bringing that energy to people."

One thing even an ass-grabbing, brain-dead PBR swizzler can understand is Gossip's palpable energy, and Beth Ditto is the reactor. She whoops it up with the audience, telling stories about growing up a pink-haired lesbian in the great red state of Arkansas, before unleashing a soulful gut-howl so intense, you'd think you stumbled into a southern church and found yourself a proselyte.

Even as a refugee from the Bible Belt, Ditto doesn't sermonize with statements like "We want revolution girl-style, now" or pen songs as blatant as Sleater-Kinney's "#1 Must Have." But she's feminist to the core. Onstage, she shakes it till it jiggles, knowing she's sexy, even if she looks nothing like a Victoria's Secret model (though she shares their penchant for public nudity). Offstage, Ditto and Blilie support confidence-building causes like Rock 'n' Roll Camp for Girls.

"Rock Camp is where it's at. We're behind that 100 percent," Blilie says about the six-year-old program in Portland, Oregon. At the camp, young girls learn to play instruments and discuss music-related topics in an environment that fosters self-esteem, not self-consciousness. Blilie and Ditto love watching the girls' natural abilities take over and helping to give them a space in which to do so.

According to Blilie, this is what Oprah calls a full-circle moment. The Gossip bandmates have had their own, working with the people who inspired them, such as Kathleen Hanna, Kim Gordon, and Guy Picciotto. Now Ditto hopes to expose a new generation to a wider range of musical influences.

"A lot of them really love Avril Lavigne and Kelly Clarkson, and they have no idea there's anything else out there. You should see their faces light up when they hear Nina Simone or Nina Hagen -- they've told me they never knew women could sound like that," says Ditto.

She sets quite an example herself. Ditto's voice cradles and shakes, electrifying audiences with a raw potency reminiscent of Janis Joplin and Tina Turner. Her fiery spirit also recalls them, as she stomps and hollers like a woman possessed, sometimes snapping high heels in the process.

The band's latest album, the propulsive Standing in the Way of Control, is a soul-funk, dance-punk vehicle for her urgent delivery. Where the low-fi basics of the band's past releases muddied her bluesy growl, Standing accentuates it ("Listen Up!") and supports her vocal twists and turns to tumultuous effect ("Yr Mangled Heart"). Guitarist Bruce Paine shreds on the title track, while Blilie bass-kicks her way through "Eyes Open." All the while Ditto runs the gamut from sorrow ("Coal to Diamonds") to exaltation ("Fire With Fire"). It's definitely the group's most produced work, filled with crisp sounds, shimmering hi-hats, and grooving guitar, and it's also the most self-actualized.

While some point to the album as evidence that the band has shed its punk skin, Ditto is not concerned. She figures her critics are probably straight, skinny little middle-class white boys, playing three-chord guitar rock.

"The minute people say we're not punk anymore is the minute I feel more punk. Truthfully, I don't trust people's idea of what is punk anymore anyway," she says.

The band didn't hesitate to polish its sound; the more people get worked up about what they expect from the group, the more Ditto feels that Gossip is doing the right thing.

Blilie agrees. Then, displaying a punk-rock willingness to fly in the face of fan expectations, she adds mischievously that the group's next album should be wholly influenced by Hall & Oates. Ditto's even mentioned it to her. Critics be damned.

"I really do what I want to do," Ditto says. "Gossip really embraces its Riot Grrrl roots. We know we are very lucky to have people that came before us, that made it possible to have this [band] in our lives. I feel like I owe everything to those girls, but we also don't recreate what Riot Grrrl was, in fashion or music or form."

Whether she's taking pride in words like "fat" and "queer," or singing more like Peggy Lee and less like her punk progenitors, Ditto sees the message of Riot Grrrl and feminism as one of personal empowerment: politics with a small p and independence in a big way.