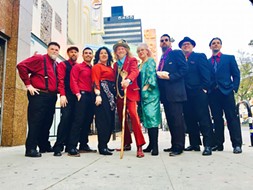 Originally released way back in the summer of 1996, Squirrel Nut Zippers’ second album, Hot, defied all expectations. At the time, pop fodder from acts such as the Spice Girls ruled the airwaves.

What a shock, then, when Hot yielded the hit single “Hell,” a song that featured woozy horns and a swinging bass riff. The album went on to sell 1.3 million copies and launch a veritable revival of swing music.

Singer-guitarist Jimbo Mathus, who played in indie acts such as Metal Flake Mother and Johnny Vomit & the Dry Heaves prior to forming the Zippers, started the band with his then-wife Katharine Whalen.

“It was just a shared interest in early American music and theater,” says Mathus in a phone interview from his Oxford, Miss. home, when asked about how the group first came together in 1993. He brings the Zippers, who’re currently on a tour to celebrate the 20th anniversary of Hot, to the Grog Shop on July 13.

“It was part of my education that I was giving myself, and I was intrigued with arts and music," he continues. "I have played music since I was six years old so for 44 years. I had a couple of record deals before that. It just came together in Chapel Hill where there was a vintage vibe going on with the Flat Duo Jets and Southern Culture on the Skids and Red Clay Ramblers. They were ahead of the curve in terms of keeping that old-time music going. We took it to another level with original sounding concoctions. Me being a writer first and foremost, we put our own spin on it. It just became incredibly successful very quickly.”

And what was it like for the indie band to see the single and accompanying album become commercial successes?

“Man, it depends on who you ask,” says Mathus. “I thought it was fantastic. I had always been in the arts and never counted on any type of success. I never even considered making money or becoming popular. It was a cool experience for me. I really enjoyed it and took that opportunity to dig in harder and learn more.”

Mathus says the band didn’t intend to spearhead a swing revival. But in the wake of Hot, swing and ballroom dancing became popular again along with old-time music recorded on old-time equipment. Even the fashions came back into vogue.

“We didn’t plan on any of that,” says Mathus. “It was weird timing. There were a bunch of bands coming out and having that success, so it was interesting and quite shocking. Swing dancing and ballroom dancing had fallen out of favor. We helped bring back the retro look and fashions. Our thing was pretty different from everyone else’s. Our sound wasn’t pigeonhole-able. It was a mixture of cabaret, hot jazz, calypso and early American theater music. There was some swing, but we were never really a swing band. We were more of a vaudeville punk rock band.”

The band split up in 2000 and Mathus went on to play with bluesman Buddy Guy. He also opened a studio and started producing other bands.

“I’m probably responsible for over 100 records personally,” he says. “The first record I made was at Sam Phillips’ studio in Memphis when I was 15. I had been around studios a lot. I had two or three record deals before the Zippers. When I had some success, I bought some gear and bought some preamps and ribbon microphones. I just launched into producing with vintage techniques. It was another facet of the whole puzzle I got into. I enjoyed helping other people bring their music to light. I can help with everything from lyrics to arrangements to you name it. It’s just something that’s part of the whole puzzle.”

Last year, the band reformed and performed its first set of tour dates since 2009. Mathus says the new lineup features some “amazing players.” The group has even started to record a new album too.

“They grew up being turned out by music from bands like us,” he says. “I have virtuoso players from varied backgrounds in jazz and burlesque and theater and costuming and everything. We have a great crew. They’re all very talented. The new band members just wanted to do some reunion shows but I wanted to make a revival. It’s not a style of music that has a shelf life. With new music coming out, I can see us keeping this thing going until the cows come home. That’s the plan. It’s not just a reunion. It’s a relaunch, and we have put together an incredible show.”