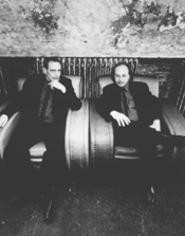 Steely Dan
Steely Dan (guitarist Walter Becker and singer-keyboardist Donald Fagen) should have the kinks worked out by the time they hit Blossom on June 28. The two are working the first Dan album in 20 years and are likely to be as polished onstage as on record. Two Against Nature, their new disc, is as suave and kinky as anything they recorded in the '70s, when Steely Dan nearly single-handedly was "alternative" rock. The Blossom date is midway through their U.S. tour, and they've already done two weeks in Japan. Two Against Nature doesn't rank with The Royal Scam or Aja; it peters out toward the end, and tunes such as "What a Shame About Me" and the deliciously deviant "Cousin Dupree" run too long. But as usual, the production is top-notch -- Steely Dan always sounds delicious, even when its songs aren't about anything -- and the sidemen Becker and Fagen have pressed into their revivalist cause are extraordinary, particularly saxophonist Chris Potter and vibist Steve Shapiro.

What Steely Dan did in the mid-'70s was upscale rock and roll by suffusing it with the vocabulary of bop. Their Monkish tunes -- "Haitian Divorce," "Deacon Blues," and the sultry "Rikki Don't Lose That Number" -- were burned into millions of brainpans during that medicated decade, for good reasons. The band offered Becker's choppy guitar; Fagen's steely, soulful vocals; arrangements that were always crisp, unexpected, and formally impeccable; and lyrics that, at best, were thought-provoking, even titillating. Becker and Fagen have had enough differences over the years to keep them from working frequently as Steely Dan, by far their most successful vehicle. Becker has released some solo works; Fagen was more successful with his solo ventures, The Nightfly and Kamakiriad. Together, they've been rare (they last toured as Steely Dan in 1993, though they've worked together in other formats), so their Blossom date should be fascinating. Or at least instructive in how oddball, aging rock stars can -- or can't -- reclaim an audience that, particularly in the classic rock hotbed of northern Ohio, is likely to turn out in force.