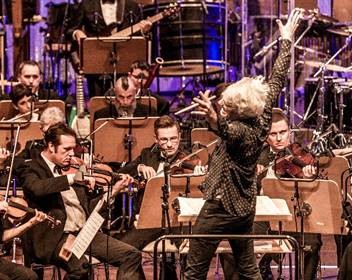 Dubbed Police Deranged for Orchestra, the show will include the Police’s biggest hits rearranged by Copeland, who'll play drums while backed by three singers, a guitarist and the full symphony orchestra.

In a recent Zoom call, Copeland talked about the show.

You’ve said you’re “allergic” to jazz but must love classical if you’re collaborating with Cleveland Orchestra. Talk about your jazz allergy and your admiration for classical music.
I never said that I was allergic to jazz, but I did discover the best way to enliven a dinner party is to say drop such comments as “you know the trouble with jazz musicians is that they all suck.” That’ll get it going. Or “jazz is the last refuge of the talentless,” which is not original. The first is original, but I forget who said the latter. The reason I say that is that I was raised on jazz. I was raised to be a jazz musician, and as some of my jazz buddies tell me, I was raised on the wrong jazz, white big band jazz like Stan Kenton and so on. I have to say that whatever my attitude about jazz music, I have a deep and abiding love for jazz fans. Like jam band fans, they will play good money to hear you play all your chops. And they don’t expect you to make room for something so frivolous as a lyric. I once did a tour of the summer jazz festivals in Europe with Stanley Clarke, who’s a blueblood jazz OG. Our set list was six songs. It was lots of solos, and it was fantastic fun. The jazz audience is just a joy to play for, so I love jazz fans. So I guess all is forgiven.

And what about classical music?
My father ws consciously exposing me to jazz for my betterment. He said that if Martians landed on earth and scientifically studied all of our music, they would announce that jazz is the superior music. I said, “I don’t care about Martians. I like Stravinsky.” That’s what my mother was playing. She was playing 20th century expressionist composers like Ravel. I’m kind of immune to classical classical music, but I have absolute respect for Mozart and Bach. We wouldn’t be where we are today without their inspiration and harmony and so on. It’s so ubiquitous that it doesn’t have an emotional charge for me personally. I understand what there is to love about it — the creativity, the invention, the musicality cannot be denied — and yet, it doesn’t make my butter flutter. The modern stuff really does and has stuck with me. When I became a teenager and discovered Jimi Hendrix, it all changed. Out went the saxophones.

When you started playing the drums, you were reportedly inspired by Lebanese drumming. Talk about how that influenced your style.
Not so much the drumming as the rhythm. I wasn’t really listening to it. I was immersed in it. I went to the American community school in Beirut, and we were surrounded by this music and didn’t pay much attention to it but it got deep into my DNA without me suspecting it. It emerged decades later with reggae. Punk clubs were discovering reggae. I was a fan of Bob Marley already and for a drummer, you have to listen carefully. My Arabic DNA was a secret sauce that I could apply to some of the other reggae figures. That’s why the Police was never reggae. There are a couple of tracks that you could call reggae, but mostly songs such as “Roxanne” and “Can’t Stand Losing You” were not reggae. They were more Arabic than Jamaican. [Singer-songwriter] Sting and [guitarist] Andy [Summers] very much had absorbed the reggae influence. They didn’t even notice that the guy behind them on the drums was doing this Arabic shit.

What was the first Police song that you deconstructed?
I think it was “Roxanne.” It was a stereo recording of a live show. The jam in the middle was my favorite part. We used to do a long improvisation, and I always loved it. We used to do the same with “Can’t Stand Losing You.” I was cutting up this track to use in my movie about the Police that I shot on Super 8. That’s why I was working on that material with a scapel. Once the scapel came out and I started carving up, I found the multi-tracks of those original recordings and found lost guitar solos and other vocals inventions. There were only cool ideas that were very Sting and very Andy but just never got to the record. I started mixing and matching. I took the lyric from this song and put it on that song. About half the material we’ll play are these derangements. The other half are more faithful to the original material. I take liberties with Andy’s guitar parts and put them in the orchestra. His parts were very orchestral. Andy can only be replaced with a 50-piece orchestra.

What Police song has proven to be the most challenging to deconstruct?
“Message in a Bottle” is like a diamond. It is perfectly created by Sting, who wrote it. I extended some sections, so I could do some orchestral stuff, but the song is what it is.

How do you go about rehearsing for the show?
My computer can play a fake version with the orchestra. I learned my part along to that. During the course of all this work, I kind of know the material. I know what it does. Really, I’m just getting my chops up. Come the night on the stage, I can go anywhere because the orchestra is so locked. That’s what orchestras do. They read the page and express it beautifully, but they are absolutely on the page. I know for sure what they’re going to be doing at any given time, so I can ride it and push it and pull it and meet it at the bridge and stomp on it and go all over the place because I know it’s solid and it’s there. It’s very liberating for me to play the drums. Because the orchestra is at much less volume, my technique on the drums has to be dialed way back in terms of volume. And that means I can dial it way up in terms of technique. In this orchestral environment, my drums have a much wider vocabulary so I’m playing with less volume but more chops. I was telling Sting about this. I told him I was playing very quietly but even more complicated than before. That was the end of that conversation.

There goes the Police reunion.
One of the reasons why we did not get on so well is that for him to excel and for him to fly the way that I intend to do with the Cleveland Orchestra at Blossom, he needs that same thing that I’m looking for with the orchestra, which is an absolute a solid platform from which to leap from the abyss and soar with the eagles. I always more of a moving target for him. I’m a free roving spirit and undisciplined and a complete pain in the neck. It was one of the problems bewteen us. I would do my best to give him that solid platform, but then I would go, “Fuck it. I’m taking off.” Both [Sting and Summers] are great musicians. They can take it but I can understand why without that hazard zone, [Sting] is happier with his session guys.

The orchestra knows you’re going to be all over the place?
The conductor does. The orchestra is reading the chart and the orchestra is following the conductor. He has one eye on me and probably thinking, “What the hell is he doing now?” But his mission is to hold it together even if I go off into the weird zone.

You have a history of working with Cleveland musicians. Talk about when that began.
I’ve said Cleveland has been good to me, and I mean it. Cleveland premiered my first opera. Decades later, I’ve written seven operas. Cleveland started me off in opera, and the Cleveland Orchestra gave a performance of my concerto for Gamelan and burned the house down with that. They completely set fire to that score. It is one of the top orchestras. I can’t wait to get back to my chuckle buddies.

What do you hope fans get out of the concert that you’ll present at Blossom?
Happy hearts, feat sore from dancing. The Gamelan concerto was very serious, and I put a lot of deep thought into it. The Cleveland orchestra performed it with more gravity than it probably deserved. It was a certain type of musical experience. This not that. This is a celebration of great songs that have great emotional impact. Everybody got married and fell in love and lived life with these songs as a soundtrack whether they are Police fans or not. These songs are hardwired into their emotions. That is a powerful aspect of a concert. It’s a combination of memory and nostalgia for songs people know. It’s really a beautiful thing. I hope they’re uplifted by song they know in this new form, and I hope they leave singing those songs.