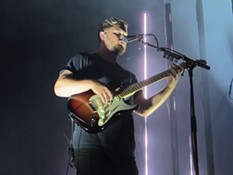 Over the past decade, British indie rockers alt-J have developed their sound to become more expansive (and louder too). These days, they sound more like Pink Floyd than Radiohead.

When playing live, the band doesn’t entirely seek to retain the delicate nature of its studio recordings but rather amplifies things to the extent that the vocals will often even be absorbed into the ratcheting percussion and synthesizer flourishes.

Much like Sigur Rós, the Icelandic band that created its own language to accompany its trippy music, alt-J approaches vocals as if they're just another instrument, and the guys regularly snort, cackle and whisper, often making it sound like they're mouthing gibberish (they're not — the lyrics are all in English). Think of them as indie rock's answer to Tuvan throat singers Huun Huur Tur.

Last night before a near-capacity crowd at Jacobs Pavilion at Nautica, the band was in fine form and employed a mesmerizing light show to further expand and amplify its already intoxicating art rock music.

Much like its appearance at the State Theatre just over two years ago, the group put on a compelling performance that confirms all the awards the British music press has heaped upon the band are well-deserved.

With superb drummer Thom Green hammering away at his kit and employing a variety of shakers (we love the fact that he doesn't use cymbals but rather goes for a percussive sound), the band sounded much more aggressive live.

Show opener "3WW" might come off as a ballad on Relaxer, the band's new studio album, but live the band cranked up the abdomen-shaking bass and delivered the tune in a wash of white noise. Snappy percussion drove "Deadcrush," another Relaxer tune, and "In Cold Blood" benefited from some rather flinty synthesizer bleeps and blips.

"Fitzpleasure" featured a cool a cappella intro before industrial strength synthesizer riffs kicked in. Bathed in red lights, the band made the song rock harder than its studio version does. Flickering white strobes amplified the intensity of "Matilda," and "Taro" made the most of its shimmering Bhangra-like beat.

The band saved its two most accessible tunes, "Left Hand Free" and "Breezeblocks," for the three-song encore, putting an exclamation mark on the terrific 20-song set.

Sohn, a group fronted by indie rocker Christopher Michael Taylor, opened with a 45-minute set of ambient electronica tunes that too often failed to be engaging. The fact that Taylor, who, with his wide-brimmed black hat looked like a hipster Pilgrim, and his bandmates often hovered over sequencers and rarely even looked up might have had something to do with that.

Still, the soulful vocals of "Conrad" distinguished the track from the others in the set and showed the London-based band's potential.