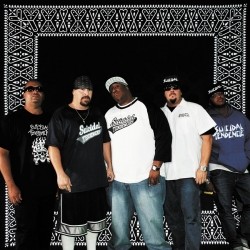 Depending on how you look at it, Suicidal Tendencies was either the biggest '80s hardcore band or wasn't a punk band at all. Twenty-seven years after the controversial group formed as a party band, the evidence points toward the latter. While fellow California bands like Black Flag and the Dead Kennedys were cresting, Venice's Suicidal broke nationwide in 1983. Its self-titled debut album was propelled by the video for "Institutionalized." With blistering leads and nimble fretwork, the crossover classic told the story of a dead-end California kid at war with his parents, school and society in general. But he'd forget about all the stress if someone would just get him a Pepsi. The album moved more than 200,000 copies. Black Flag and the Dead Kennedys topped out 60,000.

Soon - like TSOL before and Sublime after - the band drew a mob of loyal followers to its shows. The Suicidal Army was a rough-and-tumble crowd of self-declared "cycos." Whether they were longhaired metal kids or Mexican cholos in bandanas and khakis, the Suicidals made concerts miserable for fey punkers more comfortable with the Adolescents and Bad Religion. Through the '80s and '90s, Suicidal literally skated around punk and metal. By the release of 1987's Join the Army, most of the debut album's lineup had been replaced. Anthems like "Possessed to Skate" were a complete sonic departure, abandoning the circle-pit hardcore, punk-rock politics and morbid humor ST had displayed on early material. In its place was metallic crossover crunch. The title track was a seminal development in rap-rock.

The band signed to major-label Epic for 1988's How Will I Laugh Tomorrow When I Can't Even Smile Today. The group nearly cracked the Billboard Top 50 and had successful singles in the early '90s, including the thrashy "You Can't Bring Me Down" and the radio-ready "I'll Hate You Better," when the band's most famous alumnus introduced funk grooves to the Suicidal arsenal. ST's live shows were a proving ground for bassist Rob Trujillo, a funk-minded young finger-player who joined in 1989 and went on to play with Ozzy Osbourne and Zakk Wylde before landing the gig of a lifetime in Metallica. Suicidal returned in 2008, touring the world to warm up fans for their first album in eight years, a free-form rager that's slated for early 2009 release. Before leaving for the U.S. leg of the tour, band founder/vocalist Mike Muir called to chat. On the phone, he's more upbeat, relaxed and articulate than his infamous "Mr. Cyco" public persona has ever suggested.

What do you do between Suicidal activity?

You just try to keep your sanity and keep a balanced life in the real world. I have a family now. I work with my brother's company, Dogtown Skates, some. And there's a lot to do with Suicidal. We've got our own studio and we're always recording.

Your older brother Jim was one of the Z-Boys skaters. What did you learn from being around them?

They did the opposite a lot of the time, just to do the opposite. And you go, "Wow, that's cool." And then you realize, wow, that's not cool, because you end up suffering the results. That "I don't give a fuck" doesn't work. You have to be that extra thing beyond and not give a fuck, and not hold anything back, and have some moral convictions behind it, wanting to accomplish things that other people can't.

Before the first album, you recorded a four-song demo with [Black Flag/Misfits/SST Records engineer] Spot. In "Institutionalized," was the Pepsi reference originally Coke? Why did it change?

Hardcore and punk, traditionally, are lily-white. From early on, Suicidal was racially diverse, from the band to the fans. How did you get that kind of following?

When we first started, we were practicing in the kitchen where I lived with my brother. We used to have rent parties at the end of the month. And then it was our party, so we could play. So it evolved from that: "Hey, let's rent out a hall." And it started attracting punks and fans started discovering punk. And in our hood in Venice, there weren't a lot of white people.

But what do you think made Suicidal popular with cholos?

People are people, you know what I mean?

The rumor mill said the band was gang-affiliated. Were any of you?

The world is a gang. There's certain words people use [to call attention and stigmatize], like "Oh, oh, oh!" Anybody that grew up in Venice, if you didn't know somebody that was in a gang, you didn't know anybody. It has nothing to do with anything.

What made Rob Trujillo good?

Robert came from a different school. He was never into hard rock. He was just into Suicidal because he was from the neighborhood. A couple of people were like, "He's not the right guy." And I was like, "But he's by far the best bass player." That was the chance to make the band come up a level. It was a no-brainer.

During the rap-rock era, you recorded with [SoCal natives and Christian rap-rock band] POD. But you didn't like Rage Against the Machine?

I just think [Rage] said something about us - Tom [Morello, the Rage guitarist], you know? So I said what I thought. I think a lot of times, little nerdy kids get an audience, and they like the fact that they can say things, and they think people really care. And to me, that's just totally fake. Like, dude, are they really a groundbreaking political band if Sony's throwing all kinds of money at it?

What kind of set are you playing on this tour? Will we get the early popular songs like "Possessed to Skate" and "Institutionalized"?

Probably. A lot of places in the States where we haven't been in a while, we try to do a good mixture from the beginning to the end.

You're the only original member. What does it say about the band?

That's the way it is. It doesn't mean anything to me. A lot of the time, I say I wish I could get somebody to take my place. I say that in a funny way, but in a real way. A long time ago, I used to say I wish I could just be in the audience and check it out.

What does Suicidal Tendencies represent to you in 2008?

I think it would be a success if people hear it and think, "You've got metal, you've got punk, you've got all this stuff - but there's something else. There's another way to do it." If there's some 14-year-old kid, I don't want him just trying to play like Suicidal. I want him to sit there and go, "You know what? We don't have to do what everybody else is doing. How can we do something completely different?" That's what we've tried to do with each of our records. People should hear it the first time and go, "Whoa, that's not what I expected."