Send a News Tip
The In-Laws 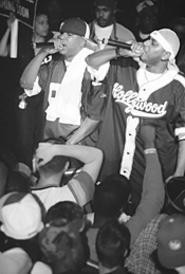 Wanda Santos-Bray
Hip-hoppers Capone-N-Noreaga were at Peabody's with the Def Jam Vendetta tour on May 14.

All guns are blazing for Gatlin: The band has entered rotation on Cleveland's FM-92.3 Xtreme Radio, becoming only the second unsigned group to achieve that feat. The hard rock troupe's new single, "Reflection," begins airing on June 10, with 7 to 10 spins each week for four to six weeks.

The band's song went into rotation after it won 92.3's nightly Xtreme Cage Match five nights in a row, topping music by the likes of Anthrax, CKY, and the Used. Gatlin is just the fourth group to be retired from competition undefeated, thus earning a spot in 92.3's "Hall of Champions." Join the band in celebrating on Saturday, May 31, at the Odeon, where they'll open for rockers Powerman 5000.

· Acclaimed guitarist Jeff Achison will hold a workshop at Heights Guitars (2128 Lee Road) from 8 to 10 p.m. on Tuesday, May 27. One of the more exciting blues axemen around, the Australian-born Achison won the Albert King Award for most promising guitarist in 1995 and has taught at Jorma Kaukonen's Fur Peace Guitar Ranch in rural southeast Ohio. Cost for the workshop is $75, and class size is limited to 10 people. For more information, contact Amy Shahinian at 216-831-1557 or [email protected].

· Back for the attack: The Metal Show, the much-loved Sunday metal program formerly on WMMS, returns to the airwaves this Sunday at 10 p.m. on 92.3 Xtreme Radio. Warlock and Chris Akin return as the show's hosts, spinning the best new local and national metal.

· Cleveland's Strangelove Recording studio is launching a compilation series spotlighting area artists. Dubbed Home on the Strange, the first volume features such locals as unhinged funksters Finless Brown, stellar post-rock instrumentalists Infinite Number of Sounds, electro-rockers Furnace St. , and more than a dozen others. A CD release party is set for May 31 at the Symposium, where Audiblethread, Furnace St., and Finless Brown will perform. The disc will be available in local record stores and at www.strangeloverecording.com.

· Cleveland hard rockers Highball have advanced to the semifinals of the Cabo Wabo Cantina's national band competition, "A Shot at the Cabo Wabo." Highball will now compete with 24 other groups for the chance to open for Sammy Hagar in October at the Red Rocker's restaurant in Cabo San Lucas, Mexico. Highball advanced by winning a series of band competitions held at the Cleveland Hard Rock Café, with show attendees voting for their favorite act. The band's songs have since been posted on the Hard Rock website (www.hardrock.com), where fans can vote for their favorite group until August 29. A winner will be chosen from five finalists on September 19.