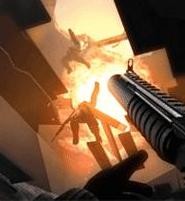 In a gross miscalculation, the enemies in Black built their bunker out of C4.
On paper, Black sounds like a sure hit: Criterion Studios (the developer behind the spectacular Burnout games) designs a first-person shooter that does away with all that boring sneaking and instead focuses on the pure pyrotechnic appeal of a Hollywood-style gun battle.

Unfortunately, Black doesn't quite live up to its hype. It accomplishes some of its goals, but falls short in so many other areas that it ends up a colossal misfire.

To its designers' credit, Black does a great job at dropping the player into gorgeous, highly destructible environments that burst into clouds of plaster dust as you strafe the scene with machine-gun fire. Bullets shatter windows, blow up gas tanks, and even tear down walls in a spectacular display of muzzle flashes, smoke, and fire. So much havoc is created that sometimes you have to stop firing just to clear the air enough to let you see what you were shooting at.

In light of how the guns chew up concrete and steel, you'd expect them to turn mere humans into pink mist, right? Wrong. Your foes are nondescript Russian-speaking soldiers -- Hey, Black, 1985 called: It wants its bad guys back -- who wear the most indestructible uniforms known to man. The soldiers are capable of absorbing hundreds of rounds before finally perishing.

As a result, the first few firefights quickly undo any confidence you might have had in the lethality of your arsenal. To avoid tedious extended gunfights, you're forced to seek cover and try for carefully aimed head shots. So much for forgoing sneaking . . .

Despite their superhuman durability and sheer numbers, the enemies in Black seem barely up to the task of providing security for a miniature golf course, much less waging war in an imaginary Eastern Bloc country. When spotted, most stand out in the open, perfectly still, and fire away until you gun them down. The smartest use crafty tactics like "ducking" when you shoot them in the face. Still others take cover behind nitroglycerin trucks and wheelbarrows full of dynamite. Apparently, basic training involved huffing paint.

The enemies' artificial "intelligence" (ahem) would be forgivable if there were a way to duel with human opponents. Yet Black offers no multiplayer game play of any kind, a mode that's a staple of most first-person shooters. Consequently, most players will mercy-kill the entire slow-witted army in a few hours and have no incentive to play the game ever again. Sure, beating Black lets you play with unlimited ammo, but ammo wasn't that scarce to begin with.

Well into the last half of the game, Black shows a glimmer of what might have been: Confronted with a fortified hallway, the player must blast through walls into adjacent rooms and circle behind enemy positions. It's an ingenious way to use the game's destructible environments as an asset to game play, rather than just a fancy special effect. Unfortunately, it's a short sequence, and once it's past, the game never again displays that level of ingenuity.