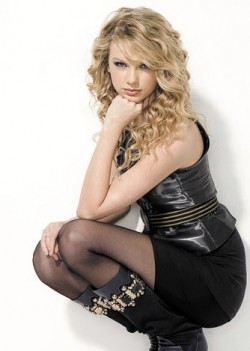 It's hard to believe Taylor Swift when she sings "I'm not a princess/This ain't a fairy tale" on "White Horse," one of the boy-crushing ballads on her terrific second album, Fearless. Just a few minutes earlier, she was joyfully exclaiming "you'll be the prince and I'll be the princess." That's more like it. After all, this is a girl who's into kissing in the rain and making every romance and breakup a big Hollywood production.

The 18-year-old country-pop superstar came out of nowhere two years ago with her self-titled debut CD, which was stuffed with a bunch of songs about boys who pissed her off - when they weren't busy ignoring her. Typical high-school stuff, but way smarter than scrawling initials inside of a broken heart. "Go and tell your friends that I'm obsessive and crazy/That's fine/I'll tell mine you're gay," she sang on one of the album's five hit singles.

On Fearless, Swift is still obsessing over boys. "All those other girls, well, they're beautiful/But would they write a song for you?" she asks the unfortunate subject of "Hey Stephen." It's doubtful. Then again, most of the guys are real dicks. When they're not being abusive or breaking Swift's heart, they're still not paying attention to her. "She wears short skirts, I wear T-shirts/She's cheer captain and I'm on the bleachers," she sings on the hooky "You Belong With Me." You'd think selling three million albums would make her a wee bit more popular.

Just like on her debut, Swift wrote or co-wrote all 13 songs on Fearless. And things haven't changed much over the past two years. Fame sure hasn't gone to her head. She pens songs to her best friend, her mom and dad, and, of course, all the guys who've been in and out of her life since she became a star. While she's gotten over Drew, the boy at the center of many of Taylor Swift's songs, she's having the same problems. The ballads "Breathe" and "You're Not Sorry" are about suffocating under love's sway; the twangy pop of "Love Story" and "You Belong With Me" are teenage fantasies, complete with ball gowns and late-night car drives.

Swift co-produced Fearless with Nathan Chapman, who balances the album's spot-on pop luster with occasional banjo and fiddle flourishes, just to remind you that Swift is a country artist. But she's so much more than a genre-crossing cutie with boy problems. Song for song, there isn't a better album this year than Fearless. And right now, there isn't a stronger or more honest female singer-songwriter than Swift. Just wait 'til she grows up.