Teenage Fanclub Puts on Magical Show at the Beachland Ballroom 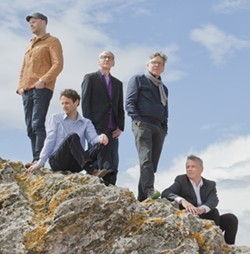 It could be the superb, almost otherworldly quality of the Scottish power pop quartet’s discography or something else about the outfit altogether, but there was something especially magical about seeing the band perform at the Beachland Ballroom last night. The band’s sonic presence always seemingly overshadowing any possible physical manifestation of the group until one had the chance to truly observe the group in action.

The Scottish power pop quartet has made excellent records since the late '80s – and while the outfit sells out at various U.K. venues whenever it tours, it often feels like a painfully small number of U.S. fans have been indoctrinated outside of the inner geekiest of music fans.

Which is their loss, to say the least. Given the sheer caliber of the band’s outstanding catalog, which is jam packed with songs that jingle-jangle like mid-'60s psychedelic rock acts such as the Byrds with hints of melodic undulation one might more readily associate with all that is Brian Wilson, it’s curious why more folks aren’t sporting the clever mirror-image Teenage Fanclub T-shirts the band hocks at their shows these days.

Last night, the Beachland Ballroom was loosely packed with folks whom one could only assume also put on “Songs From Northern Britain” when they’re feeling down for one of the band’s first U.S. dates on the tour for their recently released and critically lauded new album, Here.

The group hasn’t been in Cleveland in a while – not since ’97, to be exact. And while it’s been 19 years since northeast Ohio has been graced with the swooning vocal harmonies and infectious sonic optimism that is Teenage Fanclub, the relatively large group swaying to indie rock gems such as “It’s All In My Mind” and “Sometimes I Don’t Have To Believe In Anything” was evidence enough that they certainly have been missed.

Teenage Fanclub is the sort of band that crafts music that feels awfully familiar while all at once new and exciting. For example, “The Darkest Part Of the Night,” a tune from the band’s new album that the group performed superbly last night, sounds both like something you’d hear off of a mix tape from an ultra hip buddy as well as a cut from the soundtrack to a truly great movie that has yet to be made.

“Sometimes I Don’t Need To Believe In Anything” is a swaying, icy pop song that must be intricately personal for every person who hears it, and to experience it being performed in front of a whole lot of people who also must turn to the warm, ever-comforting sonic embrace of Teenage Fanclub in times of emotional need is a gorgeous thing.

Earlier this year, the band not only released its first new album in six years, but it also also debuted official music videos for both “Thin Air” and “I’m In Love,” which are the band’s first officially endorsed music videos ever. The first of those was recorded largely on the beach near Edwyn Collins’ (of Scottish post-punk rockers Orange Juice) studio – and something about the crashing of the gray waves against the deeply pigmented Scottish countryside gives listeners a further insight into the world of a band that perhaps they never dreamed they’d ever see.