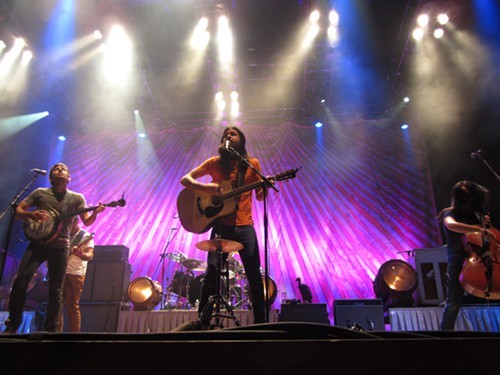 Likely known to a widespread audience more for their catalog of really terrific studio albums than their live shows, the Avett Brothers are surely one of the top touring acts still running around the world today. They brought their spectacular blend of spirit and talent to the bee-yoo-tiful banks of the Cuyahoga River on Friday night, delivering a towering performance as high-speed winds and dazzling lightning raged on against the Cleveland skyline.

The band tore through a dynamic setlist that drew on all eras of their time together. (See the full setlist below.) A certain highlight came during "Down with the Shine," which boasts some of the band's most heartfelt lyrics.

Midway through the show (and foreshadowed earlier in the afternoon), torrential rains began beating down on the Nautica overhang. On the concourse behind the stands, fans were cheering on the music and talking about the show thus far. Inside, everyone kept dry and continued rocking out. Mimicking Scott and Seth Avett's jaunty dance moves, the bleachers at Nautica were absolutely shaking all night.

The set came to a close with "Head Full of Doubt/Road Full of Promise," which echoed many of the earlier songs' messages of perseverance and faith. Afterward, the crowd went insane and begged the band to return.

With verve, the band's encore summed up all that was good with the night. The final song of the encore, "I and Love and You," reeled in the collective emotions of the crowd and planted a perfect coda on the nighttime festivities.

Encore:
Shady Grove (Traditional cover)
Kick Drum Heart
I and Love and You