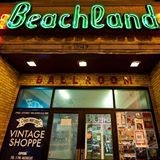 Facebook.com
Since opening in 2000 in an old Eastside Croation dancefloor, the Beachland Ballroom and Tavern has become one of the city’s busiest music venues. It generally has concerts seven nights a week and has hosted acts such as the White Stripes, the Hives and Black Keys before they got big.

“It is rewarding to recently be named in a national online article as one of 9 must-attend venues in America, along with the legendary 9:30 Club in Washington, Shubas in Chicago, The Fillmore in San Francisco and Bowery Ballroom in NYC,” says co-owner Cindy Barber, who owns the club with Mark Leddy, in a press release. “It is hard to believe we have made it to our 16th anniversary. We thank all of our supporters and our dedicated staff for helping to get us this far and to all the bands over the years who have spread the word about our now historic existence."

To celebrate, the Beachland has booked a number of special shows.

Local acts such as the Modern Electric, Cities & Coasts, Jivviden, Shivering Timbers and Sleepykid perform on Saturday, March 5. On Sunday, March 6, blues guitarist Coco Montoya, a former member of John Mayall & the Bluesbreakers and Brickhouse Blues Band, performs in the ballroom while Rivers and Rust, a duo featuring Matchbox 20’s Kyle Cook, plays in the tavern.