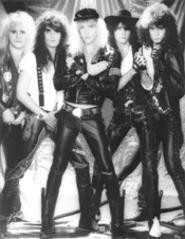 The legacy of big hair and leather: Warrant, circa 1989.
"Try to dispel those rumors that I died last week in a car crash," says Warrant singer Jani Lane one afternoon while hanging out at the Revolution, a Parma nightclub run by local guitarist Billy Morris, who joined the group eight months ago. Lane's been fielding calls from his manager ever since stories about his death started surfacing on Internet sites last week. While Lane might be hung over from one too many shots of Jägermeister from the night before, he's alive and well, sipping a Bud Light to help nurse himself out of an alcohol-induced haze.

The same can't be said for his career.

After two multiplatinum hits (1988's Dirty Rotten Filthy Stinking Rich and 1990's Cherry Pie), Warrant has slid slowly out of the limelight, getting dropped by Columbia Records after 1992's Dog Eat Dog only went gold. The band eventually surfaced on CMC International, a label for has-been metal acts that has released Warrant's last three records. In the midst of recording new material, some of which was recorded at the studio Morris runs out of a small, nondescript house next to the Revolution, Warrant is on the comeback trail. After a short Midwest tour that includes a January 21 stop at the Agora, the group will play shows in L.A. and Las Vegas, and Morris will help Lane pack up his belongings so he can move back to Ohio (Lane was born and raised in the Kent area). The two have plans to open a recording complex near downtown Cleveland and finish work on the new Warrant album. The group hasn't signed a record deal yet, and Lane isn't naive enough to think that rejuvenating his musical career is going to be anything other than an uphill battle.

"Right now, there's a stigma attached to us because of the whole '80s thing," Lane says. "I think it's ridiculous. You've got guys like Art Alexakis from Everclear selling four million records, and the guy's like five years older than I am. But we're not allowed to ever do anything again but 'Cherry Pie.' We're considered a nostalgia act, and I'm getting tired of it. Obviously, if we sent anything to a major label, it would literally slide across the desk and into the trash can -- or maybe even the shredder, I'm not sure. I don't think they'd even listen to it. They're that closed-minded."

But age isn't necessarily the issue. Because Warrant was part of the '80s glam metal scene that included acts such as Poison, Cinderella, and Skid Row, it was a particular target for the alternative rock acts that emerged in the early '90s. Lane confirms the story that he knew the writing was on the wall when he walked into the offices of Columbia to see a picture of the grunge act Alice in Chains where a Warrant poster used to be.

"I didn't like the negativity toward the '80s bands," Lane says. "The grunge bands all loved each other, but the '80s sucked. I thought it was a little harsh. But fuck 'em. They're all broken up now."

The new material Lane and Morris have been working on does sound like a departure for Warrant. The songs, particularly the track "It's a Perfect Day," which Morris calls "the hit," suggests the group has rethought its approach and put the emphasis on power pop rather than glam-metal. Lane maintains the group was always more pop than metal.

Still, the legacy of big hair and leather pants isn't going to be an easy one to live down. And when your band tours with Ratt and L.A. Guns, as Warrant did last summer, it doesn't make things any easier. It was just prior to last summer's tour that Morris, who had befriended Lane when Warrant played at the old Akron Agora over 10 years ago, joined the group to play guitar. Locally, he's provided a safe haven with the Revolution, a musician-friendly venue that caters equally to cover bands and original acts.

"Absolutely not," Morris says, when asked if the Revolution is an '80s metal club. "I don't want to get stuck with that, because there's tons of great bands in Cleveland that I want to play here. When I took over this place, there were some older cover bands that I had to book to pay the bills, so that's why it seems like it's gone in that direction a little bit."

And before Morris can finish, Lane chips in.

"Why is everyone so concerned about the whole '80s thing?" he asks. "Metallica was the '80s, and they don't get asked about the '80s. Why is the media in general so concerned about the '80s? They want us to say something bad or apologize for it. I loved what we did in the '80s, and I think we had a more positive attitude toward our music than a lot of bands now. I must hear the term '80s seventy times in interviews, and it trips me out, especially since we only made one record in the '80s."

Well, it might have something to do with how ridiculous hair-metal bands look in retrospect.

"I think anything in retrospect looks silly," Lane counters. "Except for Elvis's gold lamé suit. That was hot. If there's one outfit I regret, it's the all-white suits we wore in the 'Heaven' video. We looked like a group of Elvis impersonators."

And while Lane cut his hair and stopped using hairspray some time ago, just to prove that things haven't really changed that much, he makes a point to emphasize the fact that he's getting a divorce and will be moving to Cleveland as a single man.