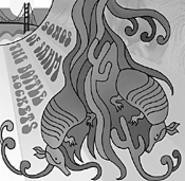 If there were an Americana Hall of Fame, Texas-bred Doug Sahm would be there -- if not as a performer, at least as an early influence. Sir Doug, as he was known to his fans, was one of the first artists brought up on country, Western swing, and blues to become a rock and roller, while never sticking strictly to rock and its commercial sensibilities. The Sir Douglas Quintet's 1965 garage-rock hit "She's About a Mover," testosterone in 4/4 time, might have been the "Rock Around the Clock" of Americana.

So what better band to provide a tribute CD to Sahm than the hard-charging Bottle Rockets? They've been on the rocking side of Americana for a decade now. Moreover, the Sahm songs chosen for this record are exclusively from the scorching Sir Douglas Quintet vault, rather than the Texas Tornados, the country-conjunto hybrid outfit Sahm had in the '90s with Freddie Fender, Flaco Jimenez, and longtime partner Augie Meyers.

Of course, the downside of this record -- and most like it -- is that the tunes aren't as good as the originals. But just try finding those originals, Mr. and Ms. Generation X. Hey, if anyone knows where we can score a copy of Honky Blues, call us. Taken as they are, the songs that make up Sahm are all very good. The Rockets seemed to pick the ones closest to their own country-influenced rock. Even Sahm's forays into psychedelia are handled deftly, and the fellows do justice to the two Sahm songs that could never be left off a tribute CD -- "She's About a Mover" and "Mendocino," the only hits the Sir Douglas Quintet had. All told, Songs of Sahm is a fine introduction to the work of a man who was always more highly respected by critics and peers than consumers.