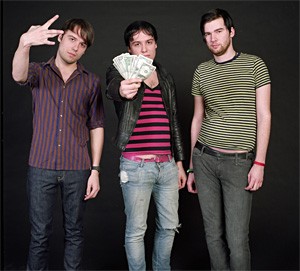 The Cribs plan to purchase three — count 'em, three! — PBRs at the Grog Shop this week.

The Cribs are three British brothers whose first two albums didn't make much of an impression in the States — mainly because they weren't released here. But the new Men's Needs, Women's Needs, Whatever slams down one killer riff after another, igniting both their career and Britpop in the process. Franz Ferdinand's Alex Kapranos plays producer, and he applies a ringing sheen to the CD that never undercuts the band's raging punk instincts. Like the Arctic Monkeys, the Jarman siblings spend most of their time hanging out in clubs, drinking too much, and unsuccessfully hitting on girls. Songs like "Our Bovine Public" and "Men's Needs" load up on both hooks and charm, while the six-minute "Be Safe" features a free-form poem read by Sonic Youth's Lee Ranaldo, which is perfect for your end-of-the-night chill-out.